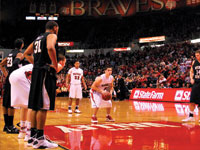 In the movies, the final game of the regular season always pits two teams that are deadlocked in the standings against one another, as if the schedule makers knew before the season how it would end up.
This season has been everything but a movie and the only perfect way to end it would be to have the two teams tied in standings play.
Coming into the last game of the regular season, the Creighton Bluejays and the Braves had identical conference records of 9-8.
They took to the floor at Creighton to decide who would be the home team in the Missouri Valley Conference tournament this weekend.
Sophomore Taylor Brown came off the bench and gave the Braves their best single-game offensive effort all season with 27 points.
“He was aggressive offensively and he made some strong moves to the basket,” coach Jim Les said.
But the Braves had a tough time finding scoring elsewhere. Freshman Jake Eastman had 13 points and junior Andrew Warren had 11.
Creighton sunk the Braves behind 51 percent shooting and 43 percent from beyond the arc.
That shooting propelled the Bluejays to an 82-71 victory.
“We’re not going to give up 82 points on the road and win too many games,” Les said.
The Braves capped off the season with conference accolades for a handful of players.
Brown was named the captain of the MVC’s Most-Improved Team. Junior Sam Maniscalco was named to the All-MVC second team and Warren was named an honorable mention for the All-MVC team.
Maniscalco is the Braves’ active leader in points. He is on a turnoverless streak that stretches four games and dates back to the overtime period against Indiana State.
Warren is ranked fourth in the MVC in scoring with 14 ppg.
Brown was the fifth leading with 14 ppg and fifth rebounder with seven rpg, which are up from three points and three boards a game last year.
More from SportsMore posts in Sports »