Bradley knocks off Drexel in BracketBusters 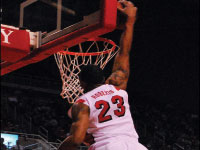 Bradley took the floor against the Drexel Dragons in its last non-conference game this regular season last Saturday in its annual BacketBuster contest.
In the battle between mid-majors, Bradley solidified its season resume with a 76-60 win as the Braves enter the Missouri Valley Conference tournament.
Bradley played for the fourth time this year without sophomore Taylor Brown after he received his third suspension of the season.
Freshman Dyricus Simms-Edwards stepped in for Brown to make the first start of his college career.
“It hadn’t hit me all day but when I hit that pregame tunnel, I felt it,” Simms-Edwards said.
Following the same script they have used all season, the Braves stormed off to a 33-26 lead at half time.
Both teams opened the game ice-cold from the floor. Bradley shot 4-12 and Drexel shot 2-9 at the onset of the competition.
Drexel had great bench support early after Chris Fouch hit two 3-pointers as soon as he entered the game and gave the Dragons an early 15-13 lead.
The Braves came to life and took the lead from Drexel on a nine-point swing. The half came to a close with a baseline dunk by senior Chris Roberts.
“That dunk really sparked us,” Simms-Edwards said. “We really want energy like that.”
After spending most of the season in a similar situation coming out of the half, the Braves ditched the season’s formula and stayed in control the rest of the way. Their lead never dropped to less than five points in the second half.
Roberts paved the way for the Braves with his first double-double of his career, after he registered 15 points and 11 rebounds.
The Wichita State Shockers came to Carver Arena for the Braves’ last home game of the season.
The Braves’ Senior Night was meant to honor Roberts and fellow seniors Sam Singh and Ryan Phillips, but a couple of juniors stole the show.
Sam Maniscalco had his first double-double and the game-winning free throws and Andrew Warren contributed 18 points to give the Braves a 75-73 win.
Maniscalco had 19 points and 10 assists – both team highs for the Braves.
More from SportsMore posts in Sports »