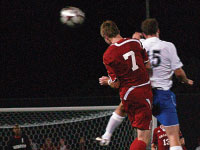 Bradley soccer won the Busey Banks Kickoff Festival last weekend.
The tournament started last Friday with a nationally televised game between Bradley and Memphis.
The Braves started strong with senior forward Chris Cutshaw scored a goal nine minutes into the game. This was Cutshaws’s 24th career goal.
Bradley’s defense stayed strong throughout the first period of the game and junior goalkeeper Drew Van Kampen did not have to make a single save until the second period.
With three minutes left in the game Memphis scored, tying the game to 1-1.
Neither team was able to score in the 20 minutes of overtime, but the Braves outshot the Tigers 2-1 giving them the advantage at the end of the game.
The tournament continued Sunday afternoon where Bradley faced off against Mercer.
Cutshaw scored a quick goal again, scoring in the second minute of the game. He finished off the period by giving Bradley a 2-0 lead in the 40th minute of the game.
But it was Cutshaw’s third goal of the game that gave him his 27th career goal and moved him into a tie for fifth place on Bradley’s career list.
“I’m excited that we are playing well,” Cutshaw said. “I guess the team is just making the plays and I am putting the ball in the net.”
Cutshaw is the first Brave in Bradley history to score a goal in the team’s first three games. He also recorded the seventh hat trick in the soccer program’s history with his three goals against Mercer.
Throughout the whole game against Mercer, the Braves had very strong defense and did not allow a single shot on Bradley’s goal.
“We had a really great defense,” Van Kampen said.
Van Kampen was credited for the season’s first shutout even though he did not have to make a single save.
The tournament ended with Bradley and Memphis tied with a 1-0-1 record, but because Bradley outshot Memphis in their game Friday night, the Braves received the tournament title.
“So far we are doing really well,” Van Kampen said. “We had good wins against NIU and Mercer, but it’s unfortunate that we did not get the win against Memphis.”
Four Braves were honored by making the Busey Bank Kickoff Festival all-tournament team, including Cutshaw, sophomore left back Bryan Gaul, senior midfielder Justin Bigelow and senior defender Travis English.
Cutshaw was also named Country Financial Scholar-Athlete of the week this Wednesday for his performance thus far in the season. Sophomore Bobby Smith was named Valley Scholar-Athlete of the week for his athletic performance and his academic success.
The Braves will host Western Michigan, Xavier and Evansville at the Hotels at Grand Prairie Invitational at Shea Stadium this weekend.
The tournament will kickoff with a game between Bradley and Western Michigan at 7:30 p.m. on Friday night and will end the tournament against Xavier at 7:30 p.m. Saturday.
More from SportsMore posts in Sports »