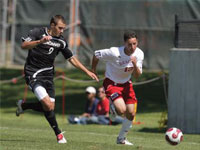 Bradley soccer had a strong start this season by winning their eighth consecutive season-opener Tuesday night against Northern Illinois University.
The Huskies provided a hard game by outshooting the Braves 22-10 and having a 10-3 shot on goal advantage.
“Relatively speaking it was a good game,” head coach Jim DeRose said. “They returned 10 of the 11 starters which made it a difficult game.”
The 2-1 victory gave DeRose his 13th season-opener win in his 14 years at Bradley.
NIU started the game strong with Josh Karsten scoring the first goal off of a NIU corner kick in the 14th minute of the first period.
The Huskies provided eight of the next nine shots in the rest of the first, but could not get past Bradley’s defense.
Senior Justin Bigelow finished off a Bradley corner kick and tied the game for the Braves in the second period.
“Bigelow got the first goal and gave a great performance throughout the game – the results of his great work ethic,” DeRose said.
In the 83rd minute of the game, senior Chris Cutshaw scored the winning goal. This was his seventh career game-winner, which puts him tied for fifth on Bradley’s list of all-time game winners.
Cutshaw’s goal also moved him into a tie at the top of the Missouri Valley Conference’s active scoring list with 53 career points.
DeRose said a couple of guys really helped to secure the win on Tuesday. One of whom was sophomore Christian Meza, who assisted on both goals.
And junior goalkeeper Drew Van Kampen, who had nine saves, provided a strong defense throughout the game.
“The player of the day has to go to Van Kampen, who made a big save at the end of the game,” DeRose said. “We were able to rely on Drew to bail us out.”
DeRose said in the end it was a collective team effort.
“This was a good game not just because of the win, but also the quality of the opponent and the difficultly we faced, because they returned almost the entire game,” he said. “We may have even gone in as the underdog, but we still did well.”
This weekend is the Busey Bank Kickoff Festival where Bradley will host Eastern Illinois, Memphis and Mercer. Friday game versus Memphis will be televised nationally on Fox Soccer Channel as the opener for the 2009 NSCAA Game-of-the-Week package.
Coupons for free tickets to Friday night’s game can be found on bradleybraves.com
More from SportsMore posts in Sports »