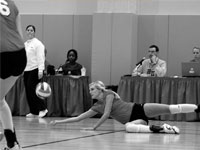 The volleyball team fell to Evansville and Southern Illinois last weekend in home matches held at the Markin Family Student Recreation Center.
In the first set, Evansville held the lead for most of the match, but with the score at 21-13 the Braves rallied a 13-3 run to tie the set at 24-24. A Bradley service error gave the lead back to Evansville, followed by Bradley freshman Madelyn Ervin notching her fifth kill, which tied the score again. Back-to-back kills by Evansville ended the match at 27-25.
A 7-2 run by Evansville helped the Purple Aces build a 22-12 lead in the next set. Bradley was able to service six kills and three aces during the frame, but in the end Evansville took the set 25-14.
The Purple Aces were able to build a significant lead in the middle of the third set. The Braves were able to close the eight-point deficit to four points. Back-to-back kills from Bradley brought the score to 24-18. The Purple Aces’ attack errors allowed the Braves to score three consecutive points. But it was not enough for the Braves to get the win, as Evansville posted a victory in the third set 25-21.
“We started out strong and went point for point but we got caught in a couple of rotations that gave up big strings of points,” coach Sean Burdette said. “Teams that get the most runs of points typically win the game. We have to string together more runs and stop of opponents from doing so.”
Junior Caitlin Staib was able to match her season-high kills with nine and Ervin’s seven kills put her as one of the top-three Bradley players.
Bradley also dropped a match last weekend against SIU.
The Braves had a .091 hitting percentage against SIU’s .226 last Saturday.
The Salukis had a 5-1 spurt in the beginning of the first set to rally a lead at 18-11. Bradley used a kill by Staib to close the deficit to four points. But Bradley attack errors allowed SIU to rally the win at 25-18.
SIU had a .444 hitting percentage in the second set which allowed them to rally a 25-10 win. This win was also helped by a 12-1 SIU run, and the Salukis were able to secure five of the six points at the end of the set.
The fourth set had four lead changes and six ties before the end of the third set. The Salukis took the lead for good after a 5-1 SIU spurt put the score at 21-18.
The Braves were able to get the deficit down to one point at 23-22 but a Saluki kill gave them the advantage at 24-22. Bradley again took the deficit down to one, but a final kill from the Salukis ended the set at 25-23 SIU.
“Again, we hit a lull midway through the first set and had to fight back from being behind,” Burdette said. “The second set we did not play hard and we were not playing as a team. The third set we played like our backs were against the wall. We have to play with more urgency from the first point.”
The Braves will return against Northern Iowa at 7 p.m. Friday and at 7 p.m. Sunday against Southern Illinois-Edwardsville, both at the Markin Center.
“Northern Iowa is one of the best teams in the league this season,” Burdette said. “They have a very aggressive attacking setter that runs a very balanced offense that can score all along the net and from the backcourt. SIUE is a very aggressive team that keeps attacking you and defending. Two very different styles of play face us this weekend. We must be more competitive from the start to finish of each set and not give up big runs of points.”
More from SportsMore posts in Sports »