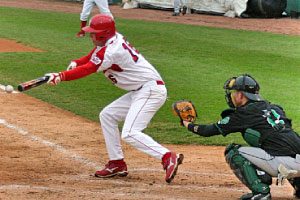 Bradley downs North Dakota over the weekend, but has its winning streak snapped Tuesday
After taking three of four from North Dakota over the weekend, the baseball team had its winning streak snapped as the Braves fell to Illinois 11-9 on Tuesday.
The loss ended another Bradley streak as well.
The Illini had not beaten the Braves since April 6, 1999, which ended a series-long five-game winning streak for Bradley.
The Braves traveled to Champaign,  with confidence coming off a successful series against North Dakota.
Freshman Joe Bircher took the mound in the series finale, giving up two runs in seven and one-third innings on his way to picking up the win for the Braves.
“I knew this was a game we could win because we’ve been swinging the bats well lately,” Bircher said. “My whole thing was to go out there and throw strikes and just keep our team there, give us a chance to do well.”
The team did just that getting on the board early, knocking in two runs in the opening inning and scoring eight over the first five frames.
Coach Elvis Dominguez said he hoped the winning streak could motivate the team.
“We have a good ball club, it’s just a matter of trying to string a couple things together,” he said. “In baseball the more you play, the more you have a tendency to get on a little bit of a roll, so hopefully this will get us going.”
The Braves got on the board first as junior Matt Fritz reached base on an error and eventually scored on a wild pitch.
A scary moment occurred in the Illini’s half of the first when an Illinois batter hit a line drive back at freshman pitcher Jacob Booden that took him out of the game.
Senior Tyler Thorton came on in relief of Booden after the injury and held Illinois to just one run over the first two innings.
Bradley took a 2-1 lead into the bottom of the third, but that’s when the wheels came loose for the Braves.
Illinois’ Brandon Wikoff led off a five-inning third with a single, and homered in the fourth as he was on his way to hitting for the cycle.
Down 7-2, the Braves didn’t give up, putting up a five-spot in the fifth to tie the game.
Bradley put together four consecutive hits and eventually used a two-run double by senior Colby Lutrell to tie the game, 7-7.
But Illinois returned to the scoring column in the bottom of the fifth as Wikoff had a two-run double of his own to give his team the lead for good.
The Illini scored another two runs in the seventh to go up 11-7.
The Braves attempted to rally in the ninth putting up another two runs, but the team eventually fell 11-9.
Bradley squared off against Chicago State on Wednesday night and swept both game of the double-header.
More from SportsMore posts in Sports »