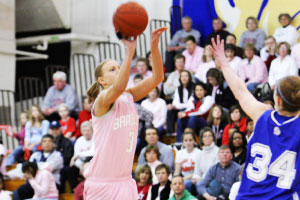 Women jump to third in MVC with pair of victories, extend winning streak to six
The women’s basketball team made huge Missouri Valley Conference strides last week, knocking off both Creighton and Drake at home.
The highlight of the home stand was Bradley’s 87-80 double-overtime victory over the Bulldogs, which moved the Braves into sole possession of third place in the conference with an overall record of 19-6, and an MVC mark of 10-4.
After a back and forth game, Drake was able to force overtime after Kristen Turk connected on a 3-pointer with 44 seconds left to tie the contest at 62.
Drake continued to roll in the first overtime period and had a chance to put the game away as Amber Wollschlage – a 71 percent free-throw shooter – stepped up to the line with 6.6 seconds to play and the Bulldogs up 74-71.
However, after Wollschlage missed both free throws, junior Jenny Van Kirk was able to grab a rebound and outlet to junior Renee Frericks as time wound down.
Frericks quickly pushed the ball up the floor and pulled up to fire a 25-foot bomb that hit nothing but net as time expired to force double overtime.
“We do stuff like that in practice all the time,” she said. “But right when I let it go, I knew it was going in.”
Frericks wasn’t done yet, as she came out in the second extra period and hit two more back-to-back 3-balls, which were followed by another trey from freshman Michelle Lund, putting the Braves up 83-74 with 3:33 to play.
Although the Braves’ shooting spree was what ultimately locked the game down, coach Paula Buscher said the inside play of senior Monica Rogers and the Bradley intensity was what kept the Braves in the ball game.
“To be able to play 39 minutes in a physical game [like Rogers did] really says something,” Buscher said. “For a while it seemed like Drake was being the aggressors in this game, but in that second overtime we were the aggressors, and that’s what made the difference.”
Rogers led all scorers with 26 points and also grabbed 16 rebounds for her eighth double-double of the season, while Frericks finished with 17 points and freshman Michelle Lund added 11, all in the second half.
Junior point guard Skye Johnson played a big part in keeping the Bradley offense rolling, and she tossed-out a career high 13 assists in the win.
“They outsized us a little bit, but Coach just kept telling us to stay aggressive,” Rogers said. “This week is what we have talked about all year – Creighton and Drake. Last time against these teams, we didn’t come ready to play, but this week we just worked hard in practice and took it to them.”
Rogers also led the Braves in the 75-67 win over Creighton, putting up 20 points and adding eight rebounds to help end the Bluejays’ 11-game win streak. After leading Bradley to the two big conference wins, Rogers was named MVC Player of the Week for the second week in a row.
Sophomore forward Sonya Harris, who played only 16 minutes in the Drake win because of foul trouble, finished with 16 points and 15 rebounds, while Johnson put up 12 and Frericks and sophomore Raisa Taylor each added 10.
The pair of wins moved the Braves to 11-1 at home this season, and the Bradley fans showed their support at Saturday’s game as the team hosted its annual “Pink Zone” game to help raise money for the Susan G. Komen for the Cure Foundation.
Bradley sported pink uniforms in the game and Buscher, along with a number of other donators, pledged $25 for each Bradley 3-pointer.
“I was joking with Coach after I made the shot at the buzzer that we weren’t done raising money yet,” Frericks said. “And then we were able to cost her another $75 in that last overtime. But, it’s a great cause to help out and we just wanted to make sure that we made the most of our opportunity and raised some money.”
The Braves were in action Thursday night at Normal against MVC-leading Illinois State, but results were not available at press time.
More from SportsMore posts in Sports »