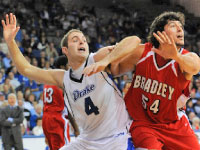 After a 4-0 start in the Missouri Valley Conference, the men’s basketball team has lost four straight and are now in a tie for fourth place in the conference.
Following their loss to the rival Redbirds and top-ranked Northern Iowa last week, the Braves couldn’t rebound going 0-2 on their recent road trip.
After falling to Drake 68-54 (15-11 overall, 6-8 MVC) last Saturday Bradley traveled to Omaha, Neb., to take on the up-and-coming Creighton Bluejays (20-6 overall, 10-4 MVC).
Bradley lost the game 79-65, but the final score was not indicative of the back-and-forth match-up.
Creighton got off to a quick start, using a 14-6 run midway through the first half to gain a 10-point lead.
Bradley (13-12 overall, 7-7 MVC) began to crawl back, and the game escalated into a 3-point contest near the end of the first half.
Junior Chris Roberts connected from long range to bring the game within six.
The Bluejays answered with a three of their own.
On Bradley’s next possession, freshman Darian Norris knocked one down from long range.
The Bluejays answered with another three.
But Bradley wasn’t done.
For the third straight possession the team knocked down a three, again off the hands of Roberts, which brought Bradley to within three points.
After scoring again, senior Theron Wilson hit a put-back to give the Braves the lead, scoring his first points of the game in the final minutes of the half.
The Bluejays hit two free throws to regain the lead, but while Creighton fans were heading concession stands in anticipation of the break, sophomore Sam Maniscalco threw up a prayer from half court, and after hitting every part of the rim, the ball sailed through the net giving the Braves a 39-37 lead at the half.
Maniscalco finished a strong first half with 13 points, but he would not score again in the remainder of the game.
The two teams played even to start the first half with both teams going on 10-0 runs.
But after Bradley’s run concluded, the Bluejays scored the next eight points to get out to a six-point lead.
Later in the game, Creighton 3-point specialist Kaleb Korver, who averages just over 16 minutes per game, hit his first two-point basket of the season.
Bradley couldn’t answer and eventually lost the game by 14.
The loss drops the Braves to the middle of the pack where Bradley and Evansville (15-9 overall, 7-7 MVC) sit just one game ahead of Drake, Wichita State (12-13 overall, 6-8 MVC) and Southern Illinois (11-14 overall, 6-8 MVC).
The teams will battle for tournament seeding the rest of the season, fighting to stay out of the bottom four, which have to play an extra game in the MVC tournament.
The Braves will have a chance to claim sole possession of fourth place on Saturday when they welcome Evansville to Carver Arena.
More from SportsMore posts in Sports »