Braves fall to UNI in MVC 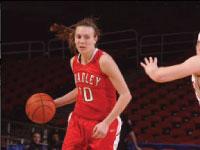 In the first round of the Missouri Valley Conference Tournament, Bradley fell to the No. 5 seeded University of Northern Iowa by a final score of 70-50.
The teams met twice in the regular season with the home team winning each matchup, making this one of the only two games in the opening round of the tournament in which there wasn’t a season sweep at stake.
Both teams got off to a very slow start, only netting one basket a piece in the first four minutes of the contest.
Freshman Olivia Allen ignited the Braves offense, scoring four points off the bench in a 12-2 run early in the first half.
With 8 minutes left in the first half, the Braves led by six but the Panthers then went on an 11-2 run sparked by UNI’s Lizzie Boeck who scored eight points during the run, putting UNI up 23-20.
But after freshman Katie Yohn drove through the lane and drew a foul to complete a three-point play to tie the game at 23 the Braves offense came to a screeching halt. They scored just two baskets through the last eight minutes of the first half, while the Panthers went on an 8-0 run to lead at halftime, 31-24.
At the start of the second half, the Braves went cold from the floor, going nearly seven minutes without scoring. The Panthers went on a 12-0 run to open an 18-point lead on the Braves.
It was a half of scoring runs as Yohn would connect on a 3-pointer to spark a 12-2 Braves’ run to cut the deficit to eight points.
The eight points was as close as the Braves were able to get throughout the rest of the game as UNI senior Nicole Clausen hit a 3-pointer to put the Braves down by double-digits yet again with just under five minutes left in the game.
Clausen’s 3-pointer broke open the flood gates, leading the Panthers on a 20-6 run and put the Braves down by 22 points.
Bradley made only two baskets in the last six minutes of play, including senior Sonya Harris’ put-in with 15 seconds remaining in the game.
UNI shot nearly 40 percent in the contest, hitting nine 3-pointers while the Braves shot just more than 32 percent from the floor, only hitting two 3-pointers and shooting 50 percent from the line.
“Next season, I see the team growing and making a stronger run in the conference tournament and in post season play,” Yohn said.
However, the season was not be over for the Braves as they were invited to the Women’s Basketball Invitational, marking the first time in program history the Braves would have a postseason.
More from SportsMore posts in Sports »