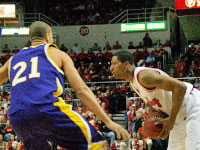 Going up against the two top teams in the Missouri Valley Conference, the men’s basketball team lost back-to-back games in heartbreaking fashion.
It started Saturday when the Braves (13-10 overall, 7-5 MVC) battled back at Redbird Arena, giving the team a chance to win late in the contest.
Down 55-47 with 8 minutes and 20 seconds remaining in the game, the Braves used four 3-pointers, two each by sophomore Sam Maniscalco and junior Dodie Dunson, to go on a 12-4 run and tie the game, 59-59.
Later on, the Braves were in a 64-61 hole when Dunson converted his shot and was fouled, but could not finish at the line.
The two teams continued to battle, and Bradley found itself down 67-65 with 11 seconds remaining.
Maniscalco was able to penetrate through the lane but with 6 seconds on the clock, couldn’t get his layup to fall.
Illinois State (19-4 overall, 8-4 MVC) hit two free throws at the other end, and the Braves lost the game 69-65.
Coach Jim Les said he thought his team “played their tails off” and doesn’t regret putting the game in Maniscalco’s hands.
“You’ve got to miss some to make some,” he said. “I’m going to put it right back in his hands the next time we have that opportunity.”
That opportunity came Tuesday when Bradley welcomed MVC-leading Northern Iowa (17-6, 11-1 MVC) to Carver Arena.
After trailing for the entire first half, the Braves came out of the gates strong in the second half, forcing the Panthers to commit three consecutive turnovers.
Bradley scored the first four points of the half, tying the game at 30-30.
The two teams fought back and forth, but the Braves eventually extended their lead to eight with just under 4 minutes remaining.
Bradley was not able to score on its next two possessions, and UNI’s junior guard Ali Farokhmanesh took advantage, knocking down two shots from long range to make the score 54-52 with 2:16 left in the game.
Mirroring the game at ISU, Dunson again converted a layup, but he was unable to connect on his free throw.
The Panthers put the ball back in the hands of Farokhmanesh, but he missed his 3-pointer and the Braves extended their lead to 58-52 on two Maniscalco free throws.
Northern Iowa connected from downtown yet again, this time on a 3-pointer from Panther freshman Johnny Moran.
Moran then made a play at the other end, stealing the ball and getting it to Farokhmanesh, who had his shot knocked out of bounds.
After the inbound pass, Farokhmanesh hit another 3-pointer to even the score, 58-58.
Les kept his promise on Bradley’s next possession, giving the ball back to Maniscalco, but he couldn’t convert in traffic, giving the ball back to UNI with 17 seconds left in the game.
Then, with 5 seconds remaining in the contest, Moran hit the Panther’s fifth 3-point shot in the final 4 minutes of the game to give UNI a 61-58 advantage.
Freshman Eddren McCain was not able to convert a desperation 3-pointer at the end of the game, and the Braves lost.
“It just came down to a lack of concentration from a player’s standpoint,” senior forward Theron Wilson said. “We had the opportunity in our hands, and it just slipped out like oil.”
Maniscalco (19) and senior David Collins (11) both recorded career-high point totals in the contest.
Les said the Panthers took advantage of the opportunities they had.
“That’s what good teams do,” he said. “You’re not going to be at your best every night, but you find a way, and they found a way.”
The win for Northern Iowa stretched the team’s winning streak to a school-record 11 games, a streak that is fifth longest in the nation.
Bradley will hit the road for its next two games.
On Saturday, the Braves travel to Des Moines, Iowa, where they will meet Drake (14-10 overall, 5-7 MVC) and then travel to Omaha, Neb., Wednesday to square off against Creighton (18-6 overall, 8-4 MVC).
More from SportsMore posts in Sports »