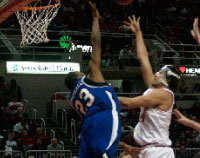 The men’s basketball team picked up back-to-back wins in its recent two-game home stand.
The wins put Bradley in sole possession of second place in the Missouri Valley Conference.
After taking down Indiana State on “Throwback Night” Saturday, the Braves dawned the special jerseys once again and sent the Shockers of Wichita State home empty handed.
The win over the Shockers (9-12 overall, 3-7 MVC) marked the second time this season Bradley (13-8 overall, 7-3 MVC) was able to defeat a MVC rival both at home and on the road.
Wichita coach Gregg Marshall said he is not happy with the way his team has been performing on the road.
“They manhandled us,” he said. “They denied each pass. No matter what we were trying to do, we weren’t strong enough, tough enough, energized enough to even make the next play.”
The win was an all-around effort, which saw nine Braves players record over 15 minutes of action.
Junior Dodie Dunson stayed hot, scoring a game-high 18 points, while adding a team-high seven rebounds.
Senior Theron Wilson was the only other Bradley player to finish in double digits, scoring 11 points and pulling down six boards.
Wilson established himself early in the season as the Braves’ number one scoring threat, and he is now beginning to get extra attention from opposing defenses.
The statistics show Bradley has responded, as Wilson’s teammates have been getting more open looks.
“We’ve proven that Theron [Wilson] doesn’t have to have a big scoring night in order for us to have success,” coach Jim Les said. “And that puts a lot of pressure on the other team’s defense.”
After a loss earlier in the season to Southern Illinois, Les made a switch in the starting line-up. Dunson and freshman Darian Norris were inserted into the line-up and sophomore Sam Maniscalco and junior Chris Roberts developed new roles as spark plugs off the bench. 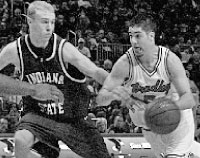 The Braves lost a close contest at Northern Iowa shortly after, but went on to win the next two match-ups with the new-look line-up.
The two captains, Dunson and Maniscalco, both serve important roles to the team.
“It matters who’s on the court at the end,” Les said. “And I don’t go too long without either one of these two [Maniscalco and Dunson] on the floor at the end of a game.”
The second half against the Shockers was key, as Wichita State came out quick and tied the game at 34.
But that was as close as the Shockers could get as Bradley went on a 14-2 run to make the score 48-36 and began to run away with the game.
“In the second half there was a lot more activity,” Les said. “I saw guys running to help, taking charges, coming over and blocking some shots from the back side, making some plays on the ball. That’s when I know we’re all in tune on the court.”
The Braves win, paired with Illinois State’s (17-4 overall, 6-4 MVC) loss to Northern Iowa (15-6 overall, 9-1 MVC), puts Bradley alone in second place, two games behind UNI for first place in the MVC.
The Braves next challenge will be Saturday when they travel to Normal to take on the Redbirds.
“Every day in this league is a challenge,” Les said. “We know we’ve got a heck of a challenge on Saturday with an explosive, offensive team, and our defense will be tested on the road.”
Bradley upset the then-perfect Redbirds on Jan. 6, taking them down 56-52.
This will be Bloomington native Dunson’s first trip to Redbird Arena as a member of the Braves.
More from SportsMore posts in Sports »