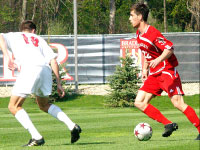 Bradley’s soccer team kicked off its home schedule on a somber note Saturday at the second annual Danny Dahlquist Memorial Game pitted the Braves against the Louisville Cardinals.
The Braves host this game to remember Danny Dahlquist, who would have been a senior this season.  Dahlquist died in a fire at his house just before the start of his sophomore season in 2007.
The game was free but donations were accepted at the door for the Danny Dahlquist Memorial Scholarship fund. Coach Jim DeRose said more thanr 1,200 people attended the game.
“It’s an event we started last year to raise money for the scholarship fund,” DeRose said. “This year, we expanded the game to include two valley rivals [Creighton and Illinois State women’s teams] and we made it more jamboree style.”
Dahlquist’s sister, Carey, is a sophomore on the women’s soccer team at Creighton.
All six of the players recruited with Dahlquist are not returning for next season.
“These guys have been here,” DeRose said. “They’ve been strong and they’ve been great at keeping Danny’s memory remembered.”
In the game, Louisville scored three quick goals and stormed off to a 3-1 lead within the first 20 minutes of play. The rest of the game went without any offense  and the final score stayed at 3-1.
“It’s great to get guys involved that didn’t get a lot of minutes in the season,” DeRose said.
The rest of the spring schedule is made up of teams that qualified for the NCAA tournament and Illinois Central College.
”Right now we have to replace the old with the new,” DeRose said . “We have 12 new recruits coming in next year.”
More from SportsMore posts in Sports »