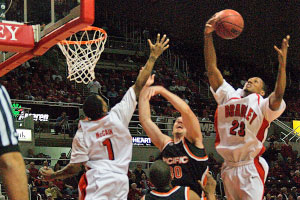 Defeat Pacific 59-49 to reach their second postseason finals in as many years
For the second consecutive season, the men’s basketball team has reached the finals of a postseason tournament.
With a 59-49 defeat of Pacific on Wednesday night, the Braves advanced to the finals of the CollegeInsider.com Postseason Tournament where they will meet the winner of the Old Dominion/ James Madison game that was set to take place on Thursday.
“The reason we’re playing and getting into it, the reason [the players] bypass their Spring Break to stay here, was to win this thing,” coach Jim Les said. “It showed a lot of maturity from this team to handle those things.”
The CIT has not only given the Braves a chance to extend their season, but it has also provided the players with extra experience that could help them in the future.
Freshman Taylor Brown, who has averaged just 11.5 minutes per game this season, has seen an increase in playing time that could be valuable throughout his basketball career.
“Coach told me early in the season, when I go out there – look at the score and make sure we either increase our lead or stay the same,” Brown said. “So that’s what I try to focus on.”
Another player who has picked up his game in the CIT is junior Dodie Dunson, who had a team-high 13 points, including two 3-pointers in the final minutes of play.
“The last four weeks he has shown an unbelievable amount of courage playing injured at much less than 100 percent and really sacrificed his offense, knowing that we just needed him to be on the floor and give us a defensive presence,” Les said.
The co-captain was modest after his high scoring performance, and said the win was a total team effort.
“Everybody out there is a leader in a certain way,” he said.
The Braves came out scoring to start the game, but slowly started to fall behind.
Down 25-20 with less than two minutes remaining in the first half, senior Theron Wilson and sophomore Sam Maniscalco hit back-to-back treys to give Bradley a one-point lead heading into the break.
Bradley committed 12 turnovers in the first half alone, which was just two-and-a-half short of its per game average.
Les said he didn’t know how the team would respond after junior Chris Robert’s game-winner Monday night.
“We needed to mentally be ready to go and not still hanging on Monday’s highlight,” he said. “I thought everybody, from the get-go, put that aside and just got after it.”
The Braves never relinquished their lead in the second half, but the Tigers did have the game within two with less than seven minutes to go. Dunson and Roberts both connected from long range to extend the Bradley lead to eight.
Pacific was not able to rebound after that, sending Bradley to the championship game of the CIT.
More from SportsMore posts in Sports »