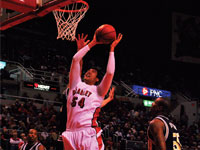 The University of Illinois is the best men’s basketball in Illinois, according to Scott Powers at ESPNChicago.com.
But last week, the Bradley Braves demonstrated why games aren’t played on paper.
In the consolation game of the Las Vegas Invitational, the Braves knocked off the Illini for the first time in their last five meetings with a 72-68 win.
“This is unbelievable to beat a top-25 team,” said junior Sam Maniscalco.
At the time of the game, the Illini were ranked 20th in the country, even though they had just suffered a loss at the buzzer against Utah the day before.
Before they took the floor against U of I, the Braves played in three games.
Bradley opened the tournament on its home floor against the Wofford Terriers. Bradley came into this game looking for its 300th win at Carver Arena. The Braves hadn’t lost a game in November at home since 2002 and didn’t plan on changing that.
The Terriers stormed out to 22-20 lead at halftime, but the second half was a different story for the Braves. They took control of the game behind the stellar play of several players that was capped off with a steal at half court by junior Andrew Warren and finished at the other end with a dunk.
Sophomore Taylor Brown returned to the floor and gave the Braves 16 points and eight rebounds. Senior Chris Roberts contributed 13 points and nine rebounds for the Braves.
After Wofford, the Braves were set to play Presbyterian College, who came into this game looking for its first win this season. But the Blue Hose would have to wait until after they played the Braves, who secured a 71-58 victory.
Once again, Brown paced the Braves in scoring with 19 points. Brown also had his first career double-double after he grabbed his 10th and final rebound of the game. Warren and freshman Milos Knezevic rounded out the Braves in double figures with 16 and 11 points respectively.
After playing these two games at home, the Braves traveled to Las Vegas to play eventual tournament champion, Oklahoma State.
The Cowboys took a 33-24 lead into the half after both teams shot 40 percent from the field.
But shooting only 58 percent from the free throw line doomed the Braves. At the final buzzer, Oklahoma State had a 68-57 lead over Bradley.
For the third game this year, Brown led the Braves in scoring with 21 points.
“We had a team meeting after the Oklahoma State game, just players and coaches,” Warren said. “We had to bounce back.”
But the big game for the Braves was against the Illini. The Braves used a more balanced offensive attack then in the rest of the tournament with five players in double figures.
Warren led Bradley with 16 points, marking the first time in this tournament that Brown did not have the most points on the team. Roberts had 13 points and Brown, sophomore Will Egolf and Maniscalco all had 12. Egolf led the Braves with nine rebounds.
More from SportsMore posts in Sports »