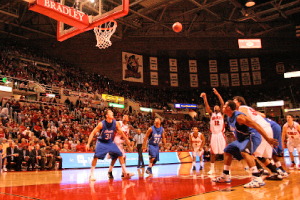 A sellout crowd of 11,398 witnessed a shocking announcement, multiple career-high performances and a double-overtime victory as the men’s basketball team defeated Drake 77-75 on Senior Night.
Ten career-highs were either matched or tied in the Braves’ season-ending thriller, but it was senior Sam Singh’s announcement after the game that sent fans home talking.
Singh told fans he has been granted a retroactive medical hardship under revised NCAA rules, meaning he will return to the Braves for the 2009-10 season.
Coach Jim Les said the team petitioned a month ago and found out earlier this week that Singh would be able to return.
“We are certainly excited to have him back,” Les said. “Even though he’s been here a while he’s really just starting to scratch the surface on his production.”
Although Singh will play his home games at Carver Arena again next season, seniors Theron Wilson, David Collins and Brian Lavin said goodbye on Saturday night.
Wilson left his mark, contributing one of his best all-around games of the season.
He finished the game with 21 points and nine rebounds, and tied his career high with six steals.
Singh, sophomore Sam Maniscalco and freshman Eddren McCain also contributed career highs.
Singh tied his career high in points with 13 and had his best rebounding performance as a member of the Braves, pulling down eight boards.
Maniscalco scored a career-high 23 points and 5-foot-11 guard McCain had his best rebounding performance of the year, raking in seven.
Junior Chris Roberts, Wilson, McCain, Singh and Maniscalco all had career highs in minutes played, with Maniscalco playing all 50 minutes of the contest.
“Theron was cramping up, Sam [Singh] was near passing out,” Les said. “It was just a gut-wrenching performance. It was all about encouragement down the stretch and them not willing to succumb to fatigue.”
The Braves were without junior Dodie Dunson, who sat out after injuring his hand against Loyola.
Drake used the 3-ball to pull ahead in the first and second periods in regulation, but Bradley battled back each time.
The Bulldogs shot 13-of-31 from long range, accounting for 39 of the team’s 75 points.
But each time Drake began to pull away, Bradley battled back.
The Bulldogs got out to an 11-point lead to start the second half but Maniscalco hit a 3-pointer to ignite a 21-10 Bradley run to tie the game.
The Braves quickly found themselves down two, and Maniscalco missed a 3-point attempt with 41 seconds remaining.
After intentional fouls, Drake’s Josh Parker missed the front end of a 1-and-1 giving Singh the opportunity to hit the game-tying basket.
Parker missed a shot at the end of regulation, sending the game to overtime.
Bradley led for the majority of the first half of the overtime and was up by three when the Bulldog’s Adam Templeton hit a three from the corner with 9 seconds remaining to tie the game.
With less than 10 seconds remaining, the Braves lost the ball and had to in-bound with just .3 seconds left.
McCain lobbed the ball near the basket and it appeared Wilson tipped it in for the win, but the referees ruled the basket no good, and the game went into a second overtime period.
With the game tied 75-75, Drake’s leading scorer Josh Young fouled out, sending Maniscalco to the line.
He sank both, giving Bradley a two-point advantage.
The Bulldogs had a chance to tie in the final seconds, but Drake’s Jonathan Cox missed two shots under the net, the second of which was swatted out of bounds by Wilson.
On the next play, Wilson stole the inbound pass and Bradley walked away with the win.
The victory locks up the No. 4 seed in the Missouri Valley Conference Tournament for the Braves, where they will meet the No.5 seed Southern Illinois Salukis.
Bradley’s game will be the second quarterfinal game at 2:35 p.m. Friday at the Scottrade Center in St. Louis.
The Braves split their regular season series with the Salukis.
Bradley downed SIU at home, winning 79-63, but fell 68-62 on the road.
More from SportsMore posts in Sports »