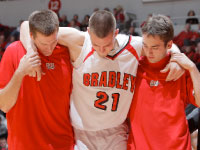 The men’s basketball team caught fire from behind the arc on Saturday en route to an 82-69 defeat of East Tennessee State at Carver Arena.
The Braves’ third straight win didn’t come without a price as the team’s recent spark plug, sophomore Will Egolf, suffered a torn anterior cruciate ligament (ACL) and will undergo season-ending surgery.
Bradley has won all three of its games since Egolf was inserted in the starting line-up.
Even with the injury, the Braves kept playing hard, using their defense and perimeter scoring to send the Buccaneers sailing.
Bradley shot 13-of-24 from 3-point land in the game, including knocking down its first five shots from long range.
Coach Jim Les said his team’s offensive outburst came from its strong defensive play.
“I just feel that the effort and energy that goes into the defense end makes the offense a lot easier,” he said.
Six different Braves connected on 3-pointers, including four treys each from juniors Chris Roberts and Dodie Dunson.
Dunson led the team in scoring for the fourth time this season with 17 points, while Roberts recorded a career-high 16 points and four rebounds.
Bradley didn’t depend on any one player in particular and it was clear the whole team contributed as nine player recorded double-digit minutes.
Senior Theron Wilson led the team with eight rebounds, and sophomore Sam Maniscalco had eight assists to lead the Braves in that category.
“They’re starting to use their athletic ability and talent to finish and make plays once they are in the right spot,” Les said.
The win was Bradley’s 15th consecutive home wins in November.
The Braves’ strong start propelled them to a 17-2 lead, and they never looked back as they took a 44-25 lead into the half.
Bradley picked up right where it left off in the second half, as the team built its lead to 24.
The Braves roll came to a sudden halt with 10 minutes and two seconds remaining in the game when Egolf hit the floor in pain.
The big man received a pass on the baseline and during a spin towards the basket twisted his knee tearing his ACL.
East Tennessee State took advantage of the injury and began to chip away at the Braves’ lead.
The Bucs cut the lead to nine with less than two minutes remaining, but two of Maniscalco free-throws paired with a Wilson slam was too much for East Tennessee State.
Bradley’s 13 3-pointers ties for the eighth most in school history.
Les said he knew his team was capable of shooting well from seeing them in practice.
“What they do every day eventually is going to show up on game night,” he said.
The Braves will look to add on to their recent success when they square off against two NCAA Tournament teams from last season, No. 5 Michigan State and Butler.
The Braves will look to even the score with an MSU team that beat them last season at Carver Arena.
Michigan State has already defeated Missouri Valley Conference foe Wichita State by eight, with a final score of 65-57.
The Spartans and Braves will square off on Sunday in East Lansing, Mich.
More from SportsMore posts in Sports »