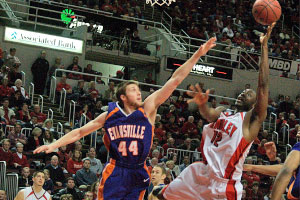 The men’s basketball team picked up its 500th Missouri Valley Conference win on Tuesday, defeating Missouri State 71-60.
With the win, the Braves became just the second MVC team to reach the 500-win plateau. Drake (511 wins) is the only other team with more Valley victories than Bradley, but the Bulldogs have been a member of the MVC for 97 years compared to the Braves’ 57.
Coach Jim Les credited his predecessors for the team’s milestone achievement.
“There are so many players, coaches, supporters and fans of this program that have paved the way and given us the opportunities that we have today,” he said. “We’ve only been a part of a small portion of those victories, but we are honored, all of us, to carry that torch.”
After an 0-4 stretch, Bradley dropped to .500 in the conference, but with back-to-back wins against Evansville and Missouri State, the Braves find themselves back in the race for a top-4 tournament seed.
Bradley (9-7) currently sits in fourth place in the conference, two games behind Illinois State (11-5), and two games ahead of Wichita State (7-9), Evansville (7-9), and Drake (7-9) who are tied for fifth.
The No. 4 seed avoids participating in one of the two play-in games of the MVC tournament, and meets the No. 5 seed in the first round.
With just two conference games remaining, the Braves will need to play well the rest of the way to go into the post season with a good seed.
Senior Theron Wilson and sophomore Sam Maniscalco stayed hot in the team’s defeat of the Bears.
Wilson and Maniscalco both scored over 15 points in both contests of the team’s two-game home stand.
Wilson had 26 against Evansville and 17 against the Bears, while Maniscalco knocked in 16 points in the first game and 17 in the Missouri State contest.
The two combined for 76 points in the pair of games, accounting for nearly half of the team’s 157 points over the two-game stretch.
Junior Chris Roberts contributed 12 points in Bradley’s win over the Bears.
The guard didn’t miss, connecting on all three of his shots, two of which were from long range, including one as the shot clock expired..
Roberts also went 4-for-4 from the free throw line.
The Texas native credited his big night to his mental approach.
“Those shots are all about getting comfortable, and knowing that there are only one or two seconds left on the shot clock,” he said. “I know it was kind of a rushed shot, but in my mind, I know I have to make it.”
The Braves battled Missouri State for much of the first half, but Bradley began to click midway through and went on a 14-4 run.
Freshman Taylor Brown scored the final five points of the run to put the Braves up 39-28, but the Bears finished strong going on a 5-0 run of their own to end the half.
Bradley came out strong in the second half, scoring the first four points of the period and extending their lead to double-digits.
Missouri State eventually fought back to within two, but would never again lead as Bradley pulled away late to win the game.
Missouri State coach Cuonzo Martin said he thought his team played well in the loss.
“Bradley did a great job of getting out in the passing lanes and pressuring the ball, which was something we expected,” he said. “It’s hard to chew these kids out, though, after such a good effort. Win or lose, Bradley is a good team that plays well on both ends of the floor, but our guys still keep coming out and competing night in and night out.”
The Braves next match-up will be a non-conference ESPNU BracketBusters game against Loyola-Chicago on Saturday. They will then go on to play Evansville on Wednesday and Drake a week from Saturday to conclude the regular season.
More from SportsMore posts in Sports »