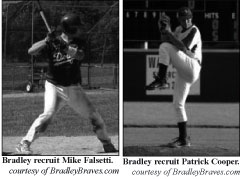 First-year Bradley coach Elvis Dominguez has recruited enough players to fill up the diamond and have a full five-man rotation for next year.
Dominguez and his staff worked together to bring in 14 recruits ranging from seven states including New York and Florida.
“You’re dealing with three high school all-americans,” Dominguez said. “These guys were well known.”
The 14 prospects feature one catcher, two infielders, three outfielders, six pitchers and two shortstops, who will be used in both the infield and outfield.
“Shortstops are usually the better athletes in high school level,” he said.
The class will replace the team’s 10 departing seniors.
The team philosophy  for Dominguez  will include swiping as many bases as possible with his speedy recruiting class.
“Stealing 140 bases for us is nothing,” he said.
Dominguez said his team could be compared to the style of play Willie McGee used to play.
Patrick Cooper will come in as a junior who went 8-3 in his summer 2008 campaign. He once retired 21 consecutive hitters and posted a 2.75 ERA in the summer.
“He has tremendous talent and the chance to be a No.1 pitcher in this league,” Dominguez said.
He was named as the No. 22 prospect in junior college baseball, by Perfect Game Crosschecker. His fast ball tops out consistently at 93 mph. In his 75 innings of work this summer, Cooper didn’t surrender a single home run.
Mike Falsetti will come in to complete the other half of the team’s battery behind the home plate. Falsetti was named the No.15 best ball player in the state by Prep Baseball Report.
“He’s the number two catching prospect in the state of Illinois,” he said.
Chris Ritter will travel from Wisconsin to come to the Hilltop. Ritter hit .382 and batted in 28 while being named the area Player of the Year.
E.J. Sexton will also make the trip from Wisconsin as he comes with a .879 slugging percentage, including eight home runs.
“When you put a lot of speed on the bases and when you have a guy like that to drive in the speed, that is appealing,” he said.
The first baseman hit a homer every 13.4 at bats and also compiled an 8-3 pitching record for his team. Those combined efforts earned him first-team all-conference last year.
“He’s a kid that can play first, third and can also pitch,” he said. “We’re giving him the opportunity to play defense and hit, but not in that order. He’s here to make an impact on our lineup right away.”
Dominguez also said he was able to recruit Gus DeQuesada from Florida away from premier schools such as Miami and Florida State.
“This class has a great chance of making an immediate impact on this team,” Dominguez said.
More from SportsMore posts in Sports »