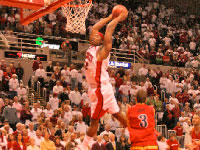 After a first half in which the men’s basketball team committed 12 turnovers and shot 17.6 percent from the field, the Braves rallied back to win their home opener against Illinois-Chicago.
Strong defense and efficient free-throw shooting kept Bradley in the game last Friday, and once the team began to click on the offensive side they began to run away with it, winning 67-61.
“I’ll have them expend all their energy and enthusiasm on the defensive end every night,” coach Jim Les said. “I told them after the game if they do that, they’re going to give themselves a chance to win a lot of games.”
While junior Dodie Dunson led the team with a career-high 22 points in his first game with the Braves, his job of containing UIC’s Josh Mayo on the defensive end was key to Bradley’s win.
Dunson held the Horizon League Preseason Player of the Year to 13 points with Mayo playing a full 40 minutes.
“It’s not just me guarding him,” Dunson said. “It was the whole team.”
Dunson was named Missouri Valley Conference Newcomer of the Week.
Senior Theron Wilson recorded a double-double in the contest, scoring 12 points while pulling down 13 rebounds.
Junior Chris Roberts finished with 11 points and seven rebounds, including a put-back dunk that got the crowd going.
“Both those guys [Roberts and Wilson] are superior athletes,” Les said. “We just wanted to get them the ball in the right spot and let them make good decisions.”
Junior Andrew Warren sat out, still bothered by a foot injury suffered earlier in the year.
Les said the soreness in his foot has become persistent.
“That’s his body telling him it’s a little bit too much, too fast,” he said. “When he walks back on the floor, we want him to be pain-free.”
Bradley 67, Illinois-Chicago 61
Dunson started the game hot, hitting a 3-pointer to score the Braves’ first points of the season, and went on to score the first seven points for the team.
After Dunson’s start, Bradley began to fall behind and only connected on three field goals in the first half.
The Braves were behind by as many as 12 points, but their free-throw shooting combined with a 4-0 run to end the half kept the game manageable as Bradley went to the locker room down 28-20.
Wilson started the second half with a slam, and the Braves extended their run to 13-2, making it a one-point game.
Sophomore Sam Maniscalco missed a 3-pointer to take the lead, but shortly after senior Sam Singh hit two free throws to tie, and then give Bradley the lead.
UIC connected from long range on the next possession, but Dunson answered back with a 3-pointer of his own and the Braves never looked back.
The crowd erupted when a Maniscalco shot bounced off the rim, and Roberts slammed it down.
Roberts said he did what he was taught.
“I was just told to go to the offensive rebounds aggressively and just keep going in every time,” he said.
Florida 81, Bradley 58
The Braves traveled to Gainsville, Fla., on Sunday to take on the No. 19 Gators.
Bradley kept the game close to start the first half, but Florida began to pull away.
“I thought we were a little cute offensively in the first half,” Les said. “Just not really attacking aggressively.”
Although the Braves had the game within eight points in the second half, Florida used 14  3-pointers to put the game away. The 14 treys were on off a Bradley opponent record.
Les said the Braves shot themselves in the foot with too many turnovers, but the game wasn’t all bad.
“It was a great experience for our young team,” Les said. “We can take a lot from that.”
More from SportsMore posts in Sports »