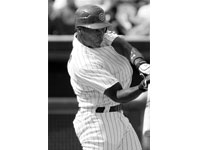 Going into every draft, there are a handful of players that come into a season as serious fantasy question marks. This season isn’t an exception.
Whether it’s injuries or a down year, these players’ histories are giving potential fantasy owners enough reason to question their worth in a fantasy league.
Last season was a rough one for any Mets fan. Injuries devastated the team worse than ever before in the history of baseball.
On some days in August, they had to use a completely different lineup than the one used on Opening Day.
From David Wright to Johan Santana, almost every Met spent time on the DL – no player looks more like an enigma this season than shortstop Jose Reyes.
Playing shortstop increases his value, but he came into last season as a top-10 pick. His speed and dash of power made him the second shortstop available after Hanley Ramirez, but his inability to stay on the field made any team that spent its top pick on him probably miss the playoffs.
The reason why he’s a question mark is because he has apparently been slow to come back. Hamstring injuries are potentially devastating to a guy who’s reliant on speed.
If his legs don’t get back to full strength, he could see a dip in his steals and base hits or even find himself on the DL again for most of the year.
Another player who finds himself on this list is Alfonso Soriano. He has never given Cub fans the production they expected when they signed him after his 40-40 season in 2006. He has consistently found himself battling to stay healthy with leg injuries.
His history should give Reyes a reason to worry because his leg injuries have severely hampered half of his game. He has never had 20 steals in his three seasons on the North Side and his power is declining fast.
Soriano carries a huge question mark over his head for fantasy owners. His promise always makes him a tough player to pass up in a draft, especially later on and he could give you some great numbers from the 12th round or later. But he’s definitely a high risk-high reward player.
The last big question mark comes from the Texas Rangers’ outfield. Two years ago, Josh Hamilton captivated audiences with his power display in the Home Run Derby with 28 homers in the first round (most people don’t even know he eventually lost). On top of the gargantuan homers he unleashed into the New York City night, he put together a great season.
His line of .304/32/130 was good enough to land him in the top-10 picks and, along with Reyes, probably ended up costing some people their playoff spots.
Hamilton struggled mightily with health throughout the season and ended up well below average outfielder production, let alone a top-10 player. His start to this spring hasn’t fared much better and he seems to be returning to the shelf again.
This season will most likely be a make-or-break year for all three of these players. With two, Reyes and Soriano, playing in very demanding markets and Hamilton seemingly near the brink of losing a spot in the Rangers’ everyday lineup, be prepared for the players to give you extreme joy or headaches.
More from SportsMore posts in Sports »