Fantasy baseball advice: Who to draft in the early rounds? 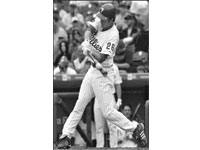 The sizzle of baseball followed closely by the smack of the ball-on-leather contact signals the end of many dreary parts of winter.
Snow is disappearing, the sun is returning and most importantly, baseball is back.
If you’re anything like me, and I hope you’re not, then this marks the start of all that is right with the world.
Now that life is returning to normal, we can turn our focus to our inner general managers and start those ever-intense fantasy baseball leagues.
Whether it’s for money or bragging rights, these leagues always get as heated as the dry, summer months.
Fantasy baseball is a much different beast than its more popular younger brother, fantasy football.
Baseball takes patience, knowledge and most importantly, luck.
Every year, the key to a victory is taking risks. Odds are that anybody who took a chance on Cliff Lee in 2008 or Chris Carpenter in 2009 early on in the season ended up doing pretty well.
This is the start of a fantasy baseball series where I will do my best to ensure your victory over your competition.
The first piece of advice is probably the most important.
The most important part of winning at fantasy baseball is putting the best product on your “field.”
What this means is there are two primary offensive-minded positions – first base and outfield. The top players in those spots, Albert Pujols and Ryan Braun, are very good players and would definitely help your team. But this makes players like Chase Utley and Joe Mauer, who play positions with less offensive depth behind them more valuable.
Let’s say you get Pujols in the first round and Jacoby Ellsbury in the second.
Those players are more than adequate for fantasy purposes. But later on, you start trying to fill the second base, shortstop and catchers, and then you realize that your best options are Geovany Soto, Rickie Weeks and Yunel Escobar.
Those players are less likely to match the output of a first baseman or outfielder drafted around the same time and that inhibits your depth.
Sure, with this team in 2009, you have Pujols’ .327 batting average, 47 homers and 135 RBIs and Ellsbury’s .301/8/60 with 70 steals. But then you have to play Soto’s .218/11/47, Weeks’ (who spent most of the season on the DL) .272/9/24 and Escobar’s .299/14/76.
Those last three lines can be brutal for your team.
Compare those to a team that takes Utley and Evan Longoria with the first two picks and gets Nate McLouth, Hunter Pence and Kendry Morales.
You still can build on Utley’s .282/31/93 and Longoria’s .281/33/113 lines, but now your depth is much better with McLouth’s .256/20/70, Pence’s .282/25/72 and Morales’ .306/34/108.
By drafting players early on from shallower talent pools, you create the opportunity for yourself to build a very deep team and can ride that to your league’s promised land.
More from SportsMore posts in Sports »