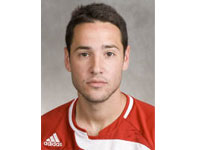 The Colorado Rapids took Chris Cutshaw (Carmel, Ind./Carmel H.S.) in the fourth round of this year’s MLS draft as the 56th overall selection.

“I told myself I wasn’t going to watch the draft, because I had heard a bunch of conflicting things about whether I was going to get drafted or not,” Cutshaw said. “So I was with a couple of buddies, and my phone started ringing off the hook, so I knew. Then I saw that I had a voicemail from the Rapids and knew that I was going to Denver.”

He is the seventh Brave since 2001 to be taken in the draft and the first since 2006, when the Los Angeles Galaxy took Chris Dunsheath as the 36th overall selection.

“I think the Rapids were the best possible fit for Chris,” Bradley soccer coach Jim DeRose said. “His versatility and the ability to play forward or wide-midfield will open up a lot of options for him on the squad.”

Cutshaw was the Braves number one scorer the last three seasons, leading the Missouri Valley Conference with 23 points in 2009. He recorded 10 goals and three assists in the 2009 campaign, including the seventh hat trick in Bradley’s history.

He also scored two game winning goals in each of his four seasons at Bradley, placing him fifth all-time in the category. He was a three-time All-MVC honoree and was a first-team selection last season.

Cutshaw was instrumental in the Braves’ postseason run as a sophomore. He converted the final goal of the shootout victory against Indiana and lifted the Braves to a third-round victory, scoring two goals in the game against the University of Maryland, one to tie and one to win in the second overtime period.

Cutshaw was one of four players drafted by the Rapids in this year’s draft, hosted in Philadelphia. The other three players were forward Andre Akpan from Harvard, forward/midfielder Ross LeBauex from Virginia and Cal State-Northridge defender Chad Borak. The four new players are expected to report to Colorado in the next week for preseason training camp.

DeRose said he believes Cutshaw would have made it to the MLS even without being drafted this year.

“It wasn’t really a matter of if or when he would get drafted into the MLS but if he would start his career in the MLS or if he would play overseas first,” DeRose said.

His hard work and determination took him from being one of Bradley’s most recognizable players of the past decade.

“I would take Chris [over any other player drafted by Colorado],” he said. “I know he could get down and do the dirty work that those other guys wouldn’t do.”

Cutshaw said his success can be atributed to a couple things.

“The opportunity to achieve success at Bradley, given to me by coach DeRose, the Bradley Athletic Department, the faculty and students at Bradley was a great help in getting me to where I am now.”

I have always been told that I didn’t have much of a future in soccer, and a bunch of people told me I wouldn’t have success at the college level. I use that as motivation and work hard everyday to prove the naysayers wrong.”

The Colorado Rapids finished sixth in the MLS Western Division in 2009 with a 10-10-10 record and will open the 2010 season March 28 by visiting Chivas USA. The rest of the schedule has not been released at this time.