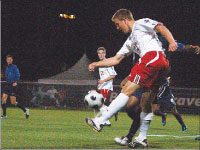 With 1,359 fans packed into Shea Stadium to cheer on their team during Saturday’s Homecoming Game, the soccer team was able to match the passion of the fans and pick up its first home win.
“It’s a big deal,” said sophomore Paul Tracy, who scored the game-winning goal in the 67th minute. “We’ve been stumbling here, making mistakes late in games.”
The Braves (5-4-1) made sure they got the job done, taking 25 shots, nine on goal, on their way to a 2-0 victory over Howard (0-11-1).
“It was nice to get a win at homecoming,” coach Jim DeRose said. “It was nice to get a shutout and get ourselves back established.”
Tracy’s unassisted goal from 25 yards out was the Braves’ go-ahead score and the eventual game winner.
“I went to cross it to [junior Chris] Cutshaw, who was going near post,” Tracy said. “And he ran past it and the goalie froze.”
The Braves’ second goal came on a two-on-one break.
Freshman Christian Meza stole the ball from a Howard defender who then fell down, leaving Meza and Cutshaw to run the field with just one defender in front of them.
Meza held onto the ball until the defense had to commit to him and then he passed it off to Cutshaw for the easy goal.
DeRose said he was happy with the outcome, but he wants to see the team do more on the offensive end.
“We’re defending well, I think that’s going to be our strength,” he said. “But we need to generate more chances.”
Howard had just one shot on goal, allowing sophomore goalkeeper Drew Van Kampen to make his only save of the game.
On a play DeRose referred to as “scary,” Van Kampen came out of the box and had to make a diving stop to keep the ball out of the net.
With the stop, Van Kampen recorded his fourth shutout of the season.
The shutout came without junior defender Grant Campbell’s help, as he sat out with a knee injury.
“He has been battling a bad knee, and we just couldn’t risk it tonight with conference coming up,” DeRose said.
With Campbell on the bench, DeRose was able to get other players on the field that have not been receiving much playing time.
The loss left Howard still looking for its first win of the year.
The win put the Braves at 199 wins all-time.
Junior Travis English and freshman Bobby Smith were both named to the all-tournament team.
The Braves finished second in the tournament behind Alabama A&M (7-3-2), a team that beat them earlier in the tournament.
The Braves didn’t record a shot on goal as they fell to the Bulldogs of Alabama A&M last Friday.
The Bulldogs played a different style of soccer, one DeRose compared to Brazil on the world level.
“We won’t see anybody like that the rest of the year, Creighton included,” he said.
The Braves had a 4-2 shot advantage going into halftime, but Alabama A&M made its shots count, connecting on both.
MfanaFuthi Bhembe scored his 10th goal of the season by knocking in the Bulldogs’ first goal and assisting the other.
Bhembe entered the game tied for the nation’s lead in goals.
The Braves will now begin a tough stretch as they travel to Chicago to take on Loyola-Chicago (7-2-1) on Saturday,.
They then begin conference play on Wednesday at Shea Stadium against Eastern Illinois (5-4-1).
More from SportsMore posts in Sports »