Inside the Athlete: Anne Creighton, Softball 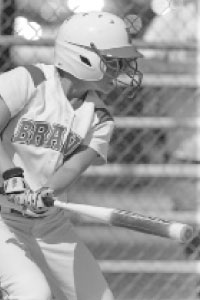 Coming into her role as a starting outfielder for Bradley softball, senior Anne Creighton said she has worked very hard to get to where she is today.
Originally from Glide, Ore., Creighton decided Bradley was the place for her after her visit to campus.
“I really liked the campus when I came to visit,” she said. “I got to spend time with the team and they were really close knit.”
But moving far away from home was in Creighton’s plans from the start.
“My parents raised me to be independent and I wanted to leave the state,” she said. “I only applied to schools that were out of state.”
Creighton isn’t the only Oregon native on Bradley’s softball team – Ashley Birdsong is from Otis, Ore., which is very close to Creighton’s hometown.
“We played softball together since we were little and it made it easier being here with someone I knew,” she said. “Her and I were roommates freshman year.”
But the transition from high school softball to college softball wasn’t easy – it took a lot of work for her to get to start.
“Freshman year when I got here I was a walk-on and I knew I wouldn’t be starting,” she said. “It’s been difficult sitting on the bench and being a cheerleader for three years, but it’s made me a better person and a better athlete.”
Creighton was Conference Player of the Year as a junior and senior in high school, and said she feels as if her high school did not prepare her for what she was going to face in her college softball career.
“My high school was pretty amateur, it was more for fun, but I got a lot of experience from my summer league,” she said. “My high school was really small, my graduating class was about 60 people.”
Not only has Creighton been a dedicated athlete, but she has also worked hard in school.  Creighton has been on the Bradley Athletic Director’s Honor Roll every semester she has attended the university.
“We practice a lot, two hours every day and sometimes weight lifting,” she said. “It can affect you if you’re not careful and don’t use time management skills.”
She said school has never been difficult for her.
“I had a 4.0 all through high school,” she said. “I guess my parents just taught me well.”
Her parents have always been supportive of her softball career.  Creighton is the only athlete in her family, but her parents are used to her busy softball schedule because of involvement in high school.
“I played volleyball and softball in high school,” she said. “My parents came to every game.”
After graduating in the fall with a major in journalism, Creighton plans on attending graduate school in Portland, Ore. She said she doesn’t plan to continue to play softball, but she would like to coach high school someday.
With post-college plans set, Creighton is staying focused on finishing this season strong.
“Our goal as a team is to make it to conference,” she said.
Creighton and the rest of the team will be back in action at 1 p.m. Wednesday at Laura Bradley Park.
More from SportsMore posts in Sports »