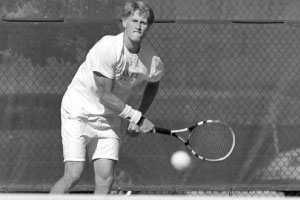 Twenty-four-year-old senior tennis player Evegeny Samoylov grew up in Moscow, watching his father idolize the game of tennis. It was because of this that Samoylov wanted to play the game when he was younger.
“My dad is a big fan of tennis, and he is the one who introduced me to the sport,” he said. “I love how the game is structured individually where everything depends on you and you determine the outcome.”
Samoylov said he loved tennis so much he decided to pursue a professional career but found he was unable to do that in Russia.
“It is impossible to combine tennis and academics in Russia,” he said. “So I started to look for schools in the United States where I could still play tennis and continue on with my education.”
Samoylov researched many schools and eventually chose Bradley, where he is studying accounting and is a month away from completing his master’s degree.
Since coming to Bradley, Samoylov has been acknowledged as an Academic All-American for tennis.
“School comes first, then athletics,” Samoylov said. “It is all about organizing and prioritizing things you have to do as well as manage time.”
After playing in Russia, Samoylov said it was a new experience playing tennis in the U.S.
“I played in many tournaments outside of my hometown,” Samoylov said. “I played and lived in Spain for three years, and I also lived in the Czech Republic for a year, so it really wasn’t difficult for me to come here and play on my own, away from my family.”
He is also married to a woman named Anastasia whom he met in Turkey.
The two started dating in Moscow and she moved to the United States three semesters ago. She is now studying photography here.
Samoylov plays in the third singles position and also competes in the second doubles position.
This is his last season playing tennis for the Braves and said he thinks it is important to finish his college career strong.
“I want to do something that people will remember,” he said. “In recent years we haven’t really been as successful as we would have hoped, and this year I am just doing my best to help my team win and be better than we were in the past.”
To help the team succeed, Samoylov has a specific routine which he follows to prepare for each match.
He said he believes the things you do out of the court is just as important as things you execute during matches.
“It is all about how you eat, how you sleep and how you spend your free time,” he said. “So I try to budget my time wisely and be responsible.”
Samoylov also said the team doing a lot better this year, and part of that can be accredited to coach Jesse Plote and what he has done for the atmosphere of the team.
“Coach Plote is a really nice guy and our team got a lot friendlier this year compared to last year,” he said. “I have built up a good relationship with him and the other guys on the team. We are looking forward to our conference matches coming up.”
Recently, the Braves had been in a losing streak, but they got back into the win column against the Northern Colorado Bears in their first outdoor match, improving their record to 6-8.
Samoylov said the team accomplished many key things, and that is how it was able to earn the win.
“We mostly worked on communication, we worked hard in practice and we talked to coach about how we can improve,” he said.
More from SportsMore posts in Sports »