Inside the Athlete: Grant Escue, Baseball 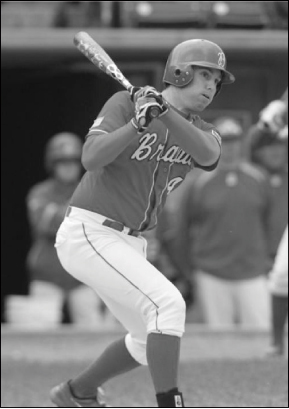 Senior baseball player and political science major Grant Escue grew up in a sports-oriented family.
With family members playing sports in college and some at the professional level, Escue could not escape his destiny in athletics.
“My dad played high school baseball and I have two uncles that played college baseball,” he said. “I grew up around sports, and baseball was the one I enjoyed as a kid and the sport I decided to pursue.”
Escue’s hard work and dedication paid off, earning him a chance to play  baseball at Stanford University for the first two years of his collegiate career.
At Stanford, Escue received minimal playing time, and questioned his role on the team.
“After my second year playing baseball at Stanford, I had a meeting with coach [Mark] Marquess,” he said. “He made it pretty apparent that I was not the power guy they were looking for at first base, so I decided that it was time to part ways.”
He was not discouraged and quickly looked into different schools.
Escue said he contacted now former head coach, Dewey Kalmer, who eventually offered him a scholarship to play for the Braves.
“[Kalmer] recruited me pretty hard out of high school, and I had a lot of respect for him, because he was a great guy and also a good coach,” he said. “He offered me a scholarship so I decided to come to Bradley, and it has been a great experience and I have really enjoyed it.”
Escue has been successful in his baseball career at Bradley, currently leading the team in RBIs and home runs.
Last weekend, the Braves lost three games in a row, and Escue was the only player to get a hit in all three games, while hitting his second home run of the season.
Escue said statistics don’t matter to him.
“It helps the team when I hit a home run, or drive somebody in,” he said. “That’s the only thing I read into – if I am helping the team or helping put runs up on the board, that’s my job.”
In addition to his play on the field, Escue was recently named the MVC scholar-athlete of the week for maintaining a 4.0 grade point average.
Escue said it’s tough to balance baseball and academics.
“School always comes first, and when I am not at practice, I’m usually reading or writing a paper,” he said. “Sometimes you have to give up a lot of things like hanging out with friends or teammates, but you have to do what you have to do, and that’s pretty much how I approach it.”
When he is not studying, Escue said he has really enjoyed his time at Bradley because he enjoys his teammates’ company.
“I enjoy spending time with them on the bus, I enjoy spending time with them on the field and overall my experience here has been very good,” he said. “The MVC is a good conference where we play good competition every week, and I wouldn’t trade it for anything in the world.”
Escue said he enjoys being close to his hometown of Washington.
“Coming home and getting to play in front of my family and friends is a great experience,” he said. “My mom and dad really never got to see me play or bat live at Stanford. They would only see me on TV and a few times here and there, so it was really special when my dad got to watch me play my first college game here.”
More from SportsMore posts in Sports »