Inside the Athlete: Jackie Roth, Softball 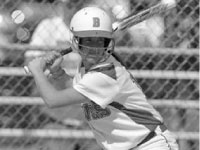 For most people, adjusting to Div. I athletics is not an easy task, but freshman Jackie Roth jumped right in.
The softball team opened play this weekend, and Roth didn’t miss a beat, going 6-for-11 in four games while spending time behind the plate as a catcher, manning the hot corner at third base and serving as the team’s designated hitter.
“It felt really good,” Roth said. “I was just going into this as ‘I’m a freshman, I’m just going to try to do the best that I can.’”
Her plan worked.
Not only did Roth have no problem hitting the ball, she helped out in other areas. Throughout the four-game span Roth had two RBIs and scored four runs.
Roth said playing different positions has no effect on her mind set.
“I’m glad I could be at least a little versatile,” she said. “Most players on our team are going all over the place.”
Since picking up the sport at the age of seven, Roth has played a variety of positions and has gained a lot of experience.
One constant in her softball career is fellow Bradley freshman Julie Sherman.
Sherman and Roth have been teammates ever since they began playing the sport, so making the trip to the Hilltop together was a no-brainer.
While Roth played volleyball and basketball, as well as danced and performed on poms, she has always considered softball her sport, making the decision to play at the next level an easy one.
Since coming to Bradley, Roth said she has realized she has to focus more on academics.
“High school, now, seems like it was very easy to me,” she said. “Bradley is definitely a notch up.”
Roth, a secondary education major, has plans of teaching culinary arts in high school after college and she is considering becoming a coach.
Although she has made an early impact, she said she is not taking anything for granted.
“There is tons of talent on this team, and I’m still fighting for a position, everybody is fighting for a position,” she said. “We don’t know who our starters are going to be, but I’m just going to keep fighting as hard as I can to get that spot.”
That’s the attitude Roth has carried with her from day one.
In the first game of the fall season, she started at first base and got a hit in her first experience playing collegiate softball.
Roth’s plan has led her to success.
When asked about her goals for this season, she said she just wanted to be part of the team.
“I just want to play,” she said. “Have fun, develop friendships with my teammates.”
More from SportsMore posts in Sports »