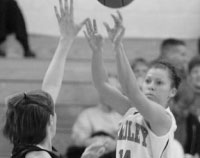 A big part of learning the game of basketball, for many players, is perfecting the jump shot.
With a limited amount of practice time and gym availability, many kids are stuck honing their skills outside in the driveway on sagging rims or traveling to the YMCA and competing for floor space.
But for freshman 3-point specialist Michelle Lund to get some court time, she just had to wake up before her brother.
“When I was in sixth grade, we were talking about building a new house and my dad had started talking about the idea of putting a gym in the basement for me and my brother to practice basketball,” Lund said. “So when we moved to the new house, he started working on it and it actually happened.”
Lund went on to explain that her father built most of the gym on his own, and the finished product was a three-quarter length court with a hoop on each end and an additional basket on the sideline with a 3-point arc.
“I can’t even explain how huge it was to have that growing up,” Lund said. “To just be able to have that down in the basement whenever I wanted to practice was incredible.”

The gym has already shown its benefits to Bradley, as Lund has broken the freshman record for 3-pointers in a season.
“To be honest, I didn’t actually know that I was anywhere close to the record until someone told me,” Lund said with a laugh. “It’s neat to be able to say that I hold a record like that though.”
Although she may not have noticed her early season shooting spree, the Missouri Valley Conference certainly has. At the time the record was broken, Lund was averaging 3.2 3-pointers per game, which was tops in the MVC and ranked 5th in the country.
She has also already been named the Valley Newcomer of the Week three times this season and is currently averaging 10.3 points per game for the Braves, second only to junior Skye Johnson.
Lund and Johnson are also the only two Braves to have started all 18 games this season.
“Coming into this year, I had no idea how I was going to fit in with everything,” Lund said. “But as the season has gone on, and I’ve gotten as much playing time as I have, it’s really been a great experience for me.”
Lund said she believes that experience will be a big key to any future success she may have at Bradley, but there are also negative aspects to being a freshman starter.
“Getting more playing time than most freshmen means that the other teams just have that much more time to pick up the habits and tendencies in your game,” she said. “But hopefully I can just keep getting better and develop a little more of an inside game instead of just being an outside shooter.”
More from SportsMore posts in Sports »