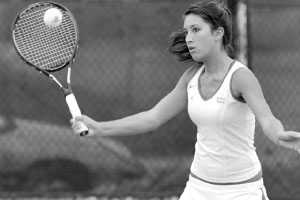 It’s no secret the vast majority of Bradley’s student body makes its way to the Hilltop from somewhere in Illinois. However, this trend does not hold true on the women’s tennis team – a fact no one knows better than sophomore Nicole Miller.
“My teammates are constantly complaining to me about the cold weather and the wind,” said Miller, the team’s only Illinois native. “Two of the girls on the team are from Colorado and one is from Arizona, so they really don’t like our weather, but I guess they’ve gotten used to it.”
Miller came to Bradley after graduating from Glenbard West High School in Glen Ellyn, Ill., and has been playing in the No. 1 spot for the Braves this spring.
Miller said she had anticipated playing with more teammates from the area, but there are definitely benefits to having teammates from other states.
“A lot of my friends from high school chose to come to Bradley, so I was just figuring that there would be more people from Illinois on the team,” the sophomore psychology major said. “It’s different, but it’s nice to get a feel for the rest of the country.”
Miller went on to say that having a number of high school friends at Bradley has been another big positive to choosing a school just two and a half hours from home.
“It’s nice to be able to carpool with friends when I need to go home,” she said. “It’s also nice to have friends here that can give you support whenever you need it.”
Miller hasn’t had much of a need for support this spring, as she has gotten off to a red-hot 7-1 individual start, with her only loss coming last weekend to IPFW’s Amy Recht.
Second only to junior doubles partner Emily Regenold’s 8-0 record, Miller has also helped the Braves jump out to a 3-1 record as a team.
“We’ve really started off well,” Miller said. “We got a 7-0 win against [Valparaiso] to start off the season and then we went into our second weekend against three teams – Ball State, IPFW and Robert Morris – and we were able to win two out of three there.”
Although Miller said she could have gotten off to a better start last season, she was still able to finish with 15 singles victories as a freshman, tied for fifth-most in single-season school history.
“I started off slow last year with a number of injuries, but I rested up and worked out a lot and it’s been a good start so far,” Miller said. “I was a little bit nervous coming into some matches last year, but this year I’ve been feeling a little more comfortable.”
Miller said as her high school tennis career winding down, she was very unsure about her college plans, but she has no regrets about choosing Bradley.
“I really get along well with the team here,” she said. “I love being able to travel with them and being able to play all the time. I really think I would have missed it if I didn’t play in college.”
More from SportsMore posts in Sports »