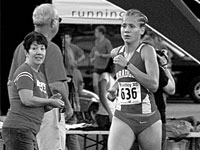 For the second straight week, the women’s cross-country team had a first place individual runner.
At the Bradley Open, the Braves ran a different group of girls than last week.
“This is just a unique year when we had to schedule three races on the first three weekends of the season,” coach David Beauchem said. “Most of our team we did not want racing on back-to-back weekends, so we had to split both teams to cover the first three meets.”
Senior Katie Nowak ran her fastest time ever in a five-kilometer race at 18 minutes and three seconds to capture the individual victory at the Bradley Open.
“Katie has been training very well and is a very accomplished runner on the track,” Beauchem said. “She is finally reaching the point of being able to race as well in cross country as she has in track.”
Overall as a team, the Braves took home third place in the university division, which is made up of the Div. I schools.
Indiana State took home the women’s title for the second consecutive year, after placing its top four runners in the top 10.
Junior Mary Goldkamp took third place with a time of 18 minutes and 17 seconds as the only other Brave to crack the top 10.
Junior Leann Murphy finished the course in 19 minutes and 28 seconds to place 16th.
Rounding out the top five for Bradley were seniors Shannon Seyller and Melanie Glander. They ended up in 19th and 31st after completing the race in 19 minutes and 43 seconds and 21 minutes and eight seconds respectively.
The men’s team competed in the Bradley Open as well, and finished in third as a team.
The Braves were led by junior transfers Billy Miller and Zach Bowling, who finished in 16th and 17th places respectively. They both finished with a time of 27 minutes and 27 seconds in the eight-kilometer.
The next Bradley runner to cross the finish line was sophomore Chris Frank at 27 minutes and 52 seconds in 19th place.
Freshman Nick Skromme and sophomore Eric Garcia placed 20th and 21st places respectively. Skromme ran a 28 minute 25 second race and Garcia ran at a 28 minute 28 second pace to cap the scoring for the Braves.
“My expectation of the men’s team is for them to put their individual races together into a great team performance,” Beauchem said. “They have the potential to be a very good team, but right now we are not showing the individual consistency we need to put our team race together. This weekend’s race at Missouri State is going to be an extremely important race for the men’s team.”
More from SportsMore posts in Sports »