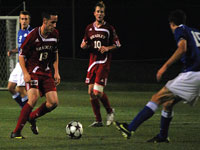 Despite a losing streak, coach Jim DeRose said he still believes the soccer team can make a miracle comeback.
The road has been tough this season for the Braves, dropping all of their five conference games and having a string of nine consecutive conference losses dating back to 2008.
“The team is definitely not achieving what we are capable of,” said senior Chris Cutshaw. “Soccer is a crazy game, and often really unfair. We have been the better team in most of the games we played in, but in soccer that doesn’t always result in a win.”
The Braves have won the battle for time of possession as of late, but this success has not translated into a winning offensive attack.
Bradley had possession of the ball about 60 percent of the time in recent games, but their struggles can be attributed down to one common factor.
“It really boils down to set pieces-throw-ins, corner kicks, free kicks,” DeRose said. “For years, we’ve been strong in this area of the game. The key is getting to the first ball and controlling the chaos and getting the second ball out.”
The Braves have not been able to get the ball out as of late, giving up six goals off of set pieces in their last five games.
DeRose compared the Braves struggle on set pieces to that of a rushing game in football, as if a team that prides itself on running the ball gets run on themselves.
Bradley has dropped its last two contests to Evansville and Eastern Illinois by the finals of 3-1 and 1-0 respectively
The Braves got their one goal early against Evansville from senior Graham Stockdale with assist from Cutshaw and senior Grant Campbell. The Braves were out shot in both games with Evansville getting one more shot and Eastern Illinois getting off three more shots.
With only four games left in the regular season, time is not on Bradley’s side.
“I think the way to get it back is to play within ourselves,” Cutshaw said. “Bring energy to the game, and believe. I think all it will take is one result to get it going.”
DeRose said the Braves won’t back down, and said he believes the team still has a fighting chance to make a “miracle comeback.”
On Wednesday, the road to a miracle comeback got a little tougher after a 3-0 loss at the hands of Creighton. Through the first half, the Braves held the game close and ended the half down only one goal.
But in the second half, it all fell apart. The Braves gave up two more goals on restarts, including one on a penalty kick after an inadvertant hand ball was called in the penalty box.
“The guys on the team and us coaches want to see a miracle run to make the conference tournament,” DeRose said. “To have any hope of a comeback, you have to keep in the back of your mind and play every game like it’s a championship game, where as other teams may sit back since they are in a better position. We have to play as if we are all in. ”
While time is certainly not on the Braves’ side, DeRose said they have to focus themselves to play one game at a time and try not to worry about the past games or future ones.
More from SportsMore posts in Sports »