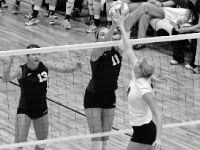 In its first game on campus this season, the volleyball team was greeted by a jam-packed Markin Family Student Recreation Center to cheer it on.
“I thought it was awesome,” coach Sean Burdette said. “We got people involved and loud in the match.”
There were so many people wanting to cheer on the Braves that fans had to find new areas to watch from.
Students pulled up chairs outside the court on the second floor and pounded at the glass casings to make noise of their own to help out the Braves.
Bradley hit the new hardwood against Northern Iowa, but the team was unable to send its exuberant fans home with a victory as it fell in four sets.
“They’re a big, physical team,” Burdette said. “They’re a very good defensive team.”
Senior Sam Black opened the match serving for the Braves, giving the team a quick 2-0 start to the crowd’s liking.
The Panthers woke up from their slumber as they went on a 9-2 run to make it 10-5 before Burdette called a timeout.
Black came out of the timeout revitalized and made a trick play Northern Iowa didn’t have time to prepare for.
In the midst of receiving a pass, Black jumped into the air with two hands poised to make a set to a Bradley hitter.
Black looked out of the corner of her eye at an empty part of UNI’s court. Upon seeing it, Black changed plans in midair and slapped the ball with her left hand behind her head into the shallow part of the Panthers court for a kill.
UNI recovered after the play, recording six blocks in the first sets. Two of those six came in the waning moments as junior Amy Reichel made two attempts at kills. But the Panthers rejected both attempts to end the set, 25-13.
The Panthers led 5-4 in the second set and pulled even further away with a 10-3 run aided by four blocks.
Black then led a 5-0 run to bring the team within six, but a UNI attack pushed through the net to roll over to Bradley’s court ending the set, 25-19.
Coming out of the intermission, sophomore Caitlin Staib led the Braves to end an eight-set winless drought. Staib recorded her career-high in kills with 12.
“She really came through for us tonight,” Burdette said after the game. “I thought she had a very good week in practice.”
Staib, who normally plays on the right side, came in after the intermission on the left side relieving Reichel.
“We were just trying to provide some additional offense,” Burdette said.
The teams battled to 13 ties in the third set and with UNI up 21-20, Staib slammed the ball on the court to pull the Braves even.
With set point on the line, the whole gym stood on its feet and cheered on the Braves.
Bradley didn’t make them wait long for the win. The team succeeded making it 25-21 in their first chance to close the set.
UNI shook off the defeat and ran away with the fourth and final set 25-15 to end the match.
More from SportsMore posts in Sports »