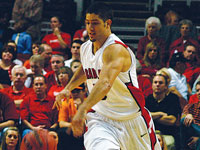 Five championships mean a lot to a leader.

New York Yankees’ shortstop Derek Jeter has shown that in his Hall-of-Fame career, he is one of a select few who were born to lead teams. He has shown millions of young athletes not only how to play baseball, but also to lead by example on the field.

Junior Sam Maniscalco was taking notes as he grew up on the basketball court.

This season will mark Maniscalco’s third in a Braves’ uniform and he said he is starting off this season with high expectations.

Not only was he awarded an honorable mention for all-MVC, but he was chosen as a captain by his teammates.

“It’s an honor to be captain,” Maniscalco said. “My teammates voted me captain for a reason, and I have to take that responsibility.”

But personal awards don’t mean much to Maniscalco.

“Honestly, the all-MVC thing means nothing,” he said. “That’s just people talking. I’m not worried about individual accolades. I’m more concerned about where the team is at the end of the season.”

Even though he may not like the individual praise he receives, Maniscalco doesn’t have much of choice here at a basketball school.

“I don’t like being in the spotlight,” Maniscalco said. “I’m just another student and everybody’s equal.”

But this celebrity status goes hand-in-hand with how important basketball is to Bradley and its history in Peoria.

“It’s an honor and a privilege to play here,” he said. “Not only for the fans and town, but for past players. There have been so many great teams in Bradley history.”

Bradley’s immense basketball history isn’t the only reason why Maniscalco chose to bring his talent to the Hilltop.

“I chose to play here for lots of reasons, but there were two big ones,” he said. “The coaching staff was the biggest. When I visited, I felt like everything was very straightforward and it felt comfortable. The second was location. It’s only two-and-a-half hours from home, and my family is close enough to come see my games.”

But basketball isn’t all Maniscalco spends his time on at Bradley. Part of playing basketball here is getting an education, too.

“It’s difficult at times [to be a student-athlete],” Maniscalco said. “You learn to manage your time right and you easily balance basketball and school. The biggest key is working ahead and staying in communication with professors.”

After his time at Bradley is over, Maniscalco said he would love to continue to play basketball professionally.

“It’s always been my goal to play in the NBA,” he said. “I would love to play in Italy or wherever is my best option.”