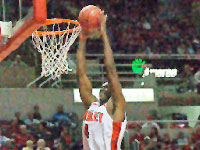 The Braves’ first-ever loss to a college opponent in an exhibition game came on Sunday as the men’s basketball team fell to Wisconsin-Platteville.
The 84-79 upset was the final exhibition game for Bradley this year, sending the Braves into the regular season with work to do.
“This group has to get focused and rededicated to the defensive end,” coach Jim Les said.
The Braves allowed the Pioneers to shoot 11-of-20 from beyond the arc and Wisconsin-Platteville made Bradley pay at the free-throw line.
The Pioneers connected on their first 20 free-throws, finishing 23-for-26 in the game.
Freshman Eddren McCain said the Braves couldn’t catch any breaks.
“Every loose ball, everything that went on the floor, went their way,” he said. “It seemed like they wanted it more.”
While Wisconsin-Platteville is a Div. III team, it is nationally ranked, and returns its top-nine scorers from a year ago.
“That was a good basketball team and they played,” Les said. “When we made mistakes they made us pay.”
Senior David Collins led the Braves with 21 points, and was one rebound short of a double-double, with nine boards.
“David was a presence inside,” Les said. “And that was even to the point where I thought we missed him a couple of times.”
Collins said he thinks the team can learn from the loss.
“You can’t take anybody lightly,” he said. “If you do, you’re going to get beat.”
Senior Theron Wilson and freshman Taylor Brown were the other two players to score in double digits for Bradley.
Wilson started the game, finishing with 12, and Brown scored 10 points off the bench.
Junior Andrew Warren saw his first action of the year, shooting 0-for-3 in his 12 minutes off the bench.
The Braves were trailing by as many as 14 points with less than 10 minutes remaining.
An 11-2 run brought the game within reach for Bradley, but junior Mike Shaw of the Pioneers hit a 3-pointer putting the game out of reach.
“Whenever you go through a little bit of adversity, you find out a lot about yourselves and us as a team,” Les said. “This group will respond, I’m quite sure of that.”
Bradley will kick off the regular season today at 7:05 p.m. at Carver Arena when the Illinois-Chicago visits.
The game will be a “white-out,” and all fans are encouraged to wear white to support the team.
More from SportsMore posts in Sports »