Men’s basketball loses second installment of the War on 74 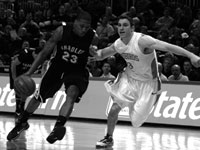 Bradley traveled to Evansville to face the Purple Aces who were winless in 12 games in the Missouri Valley Conference.

The Braves began the game last Saturday with solid defensive pressure all around.

Sophomore forward Taylor Brown ignited the offense with the first seven points of the game, and the Braves never looked back.

Bradley led by a score of 37-26 at halftime, and the Braves continued playing high-intensity defense to start the second half.

Led once again by Brown and junior guard Andrew Warren, the two combined for 18 of the team’s first 22 points in the second half.

Bradley continued to open up the offense by eventually extending the lead to 28 points with 11 minutes left in the second half.

“I thought we defended really well,” junior guard Sam Maniscalco said. “We started with intensity and it really came down to sticking to our original formula, which was defense.”

Some of the game’s second-half highlights came from senior guard Chris Roberts’ tomahawk dunk with 4:30 left in the game and his emphatic block of Evansville’s leading scorer, freshman guard Colt Ryan.

The Braves went on to win the game 83-63. Warren led the Braves with 22 points and seven rebounds. Three other Braves, including Maniscalco (15 points), Brown (21 points) and Roberts (11 points) finished in double figures.

Ten different players scored points for the Braves and every player on the bench received playing time at some point throughout the game.

After the Evansville game, the rivalry between the Braves and the Illinois State Redbirds continued Tuesday night.

The Braves wore black uniforms for the first time in program history. By distributing black T-shirts to everyone in attendance, the first ever Bradley “black-out” took place.

“Wearing the black jerseys was really fun,” Maniscalco said. “The whole black-out experience made it a really cool atmosphere.”

Bradley jumped out to an early 9-0 start after Roberts’ 3-pointer ignited the sold out crowd.

Illinois State and Bradley both ended up making a run down the stretch and the Braves ended the first half leading by a score of 35-25.

After halftime, the Redbirds brought the game to 37-35, but Bradley began a 12-2 run after Maniscalco hit a lay-up and made it a 3-point play by hitting the ensuing free throw.

With less than five minutes remaining, Illinois State’s Dinma Odiakosa made two free throws to tie the game at 54-54.

With a little more than a minute left in the game, Maniscalco drained a 3-pointer that would end up being the Braves’ last lead at 61-60.

The Redbirds’ Jackie Carmichael took three tries but finally knocked down a lay-up to put Illinois State up 62-61.

Bradley missed a shot on the next attempt down the court, but fouled Carmichael with 3 seconds remaining. He missed the free throw, but the Braves were unable to put up a shot and beat the buzzer.

“As a player you focus on one game,” Maniscalco said. “A rivalry is a rivalry though. It [Bradley vs. ISU] always has been and always will be.”

The Braves were led by Maniscalco’s game-high 17 points. Brown also tallied up 13 points.

The Braves look to get back to their winning ways versus 18th ranked Northern Iowa this Saturday at Carver Arena.