Men’s basketball surges through the MVC 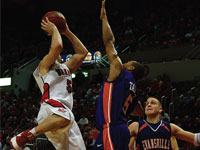 After falling into the bottom half of the Missouri Valley Conference earlier this season, the Braves have pulled themselves into a three-way tie for fourth place.

The Braves defeated the Evansville Purple Aces 74-64 to extend their winning streak to three games, before losing on Wednesday.

The Evansville victory came after the Braves secured a tough win on the road against the Southern Illinois Salukis.

Against SIU, junior Sam Maniscalco paced the Braves with a season-high 21 points in his first of two performances last week that earned him MVC Player of the Week.

The Braves kicked off the contest on a 15-0 run. The entire first half was paced by Maniscalco and freshman Dyricus Simms-Edwards’ play.

But the first half by no means settled the score as SIU battled back to close in on the Braves and wrap the half up, leading 32-29.

SIU took its first lead of the game after a run of seven unanswered points at the end of the second half at 55-54 with less than three minutes left on the clock.

For the next two minutes, play was scoreless until Maniscalco’s three free throws gave the lead back to the Braves for good.

“I’m really proud of this group, they were tested and came away with the win,” coach Jim Les said “Things didn’t always go as planned and I feel good about that. You get rewarded with good results when that happens.”

Sophomore Will Egolf set career highs in points with 15 and rebounds with 11.

“Will is a monster,” Les said. “He’s gaining a lot of confidence. He’s a tough matchup and he makes us a good basketball team.”

The Braves carried the momentum from that road win into their game against the Evansville Purple Aces back in front of the Bradley faithful.

Evansville entered the game still searching for its first win in conference after eight tries.

But the Braves had other ideas for the Purple Aces. Maniscalco continued his award-winning week with 19 points and once again led the Braves on the stat sheet.

Maniscalco wasn’t the only flashback moment for Braves fans in this game. For the second time in as many games, the Braves roared off to a double-digit lead, this time at 17-6. Egolf and senior Chris Roberts connected on an alley-oop to give the Braves the quick ten-point lead.

Evansville cut the lead down to eight points before the Braves could close the game out with a 16-7 point run.

“I’m really proud of these guys,” said Les. “They’re finding ways to win out there.”

The Braves lost to Creighton 73-68 at home on Wednesday.