Men’s basketball wins home opener, but it comes at a price 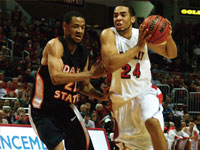 This season opened no differently than it usually does for coach Jim Les.
For the seventh time in seven years, the men’s basketball team opened Carver Arena with a win.
Bradley welcomed the Idaho State Bengals to Peoria for its second game of the year.
The first game was part of the inaugural Mountain West-Missouri Valley Showdown. The Braves played three-time defending MWC champion Brigham Young University on the road.
It was the first matchup of a series which will feature two of college basketball’s biggest mid-major conferences. The MWC struck first, as BYU took down the Braves 70-60.
Junior Chris Roberts led the Braves in scoring with 16 points off the bench. Junior Sam Maniscalco was close behind with 15. Junior Andrew Warren set the pace for Bradley on the boards with six rebounds.
The Braves returned to Peoria, looking for their first win this season, and they settled for nothing less.
The game was a back-and-forth affair between the Bengals and the Braves, but the poise and leadership of Maniscalco and the bruising nature of freshman Dyricus Simms-Edwards gave the Braves the late advantage.
Maniscalco scored seven points in the final minutes, including a 3-pointer with 1:10 left in regulation to put the dagger in the Bengals and finish the victory, 74-69.
“I had an open look and just rose up and shot it,” Maniscalco said. “I wasn’t thinking about my last four or five misses when I released the ball. I was just thinking about that one going in.”
Maniscalco finished with 13 points.
Simms-Edwards played with a very physical nature, much unlike a freshman, in his first week on the college court. He slashed his way through the lane to 12 points off the bench.
“He’s got such an innate toughness; he loves game night,” Les said. “He’s really got a great feel for the game.”
But Simms-Edwards found himself with more time on the floor for all the wrong reasons.
Senior Dodie Dunson left during the second half with an arm injury. After the game, it was announced that he broke both bones in his left forearm, which ended his season.
“I don’t feel bad for the team, I feel bad for Dodie,” Les said. “As I told him in the locker room, he did it in the first game, so he can get this year back. He cracked a big smile and said, ‘One more year of college doesn’t sound too bad.’ ”
Even though they lost an important part of this season’s team, Dunson’s absence left an opening for someone to step up.
More from SportsMore posts in Sports »