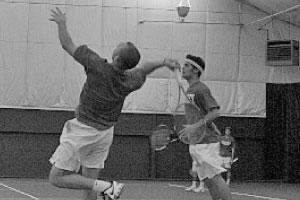 After a slow start, the Braves found their stride last weekend, beating Wright State University 5-2, snapping a 3-match losing streak.
The Braves showed some energy when juniors Milos Romic and Callen Fraychineaud defeated Jan Alafriz and Mikel Kruusmugi in the No. 1 doubles position by a score of 8-4.
The pairings of freshman Mitch Osborne and junior Richard Robertson along with seniors Evgeny Samoylov and Michel Macara-chivili could not stop their opponents and gave up the doubles point.
The Braves did not hang their heads just yet.
Bradley gained wins in all top-four singles positions along with the sixth singles position.
At the No. 1 single position, Romic squared off against Brian Dredge in a match which got a little heated.
There was some controversy about some points that led to a verbal altercation between the players where an official had to step in.
Romic said he was getting annoyed with some of the things the other team was doing.
“One of the guys was putting up the wrong scores and my opponent was doing some things that I let get to me,” he said. “I just used my anger and attacked and I eventually came out on top.”
Romic won straight sets over Dredge, 7-5, 7-6.
In the No. 2 singles position, Fraychineaud was able to put away Landon Neuman in three hard fought sets with scores of 6-3, 6-7, 6-2.
Fraychineaud said his match also got heated.
“He started calling balls that were in, out,” he said. “I just reminded myself that if he needed to do things like that, it meant that he was worried, and I just played my game.”
Fraychineaud also said it was a good feeling to get back in the win column.
“We, as a team, needed to get our confidence back and that is what we did,” he said. “We worked hard and kept fighting, and it paid off.”
Samoylov also needed three sets to defeat Alafriz by a 7-6, 4-6, 6-4 decision at the No. 3 spot and Macara-chivili gave the Braves another win with a 7-5, 6-1 final over Kruusmugi.
Osborne earned his first victory this season by defeating Pip Rehg at the No. 6 position with scores of 6-1, 6-4 and Robertson dropped his match in straight sets against Byron Wowchuk.
Coach Jesse Plote said there was one factor the team instilled in their minds.
“We focused on putting the pressure on them,” he said. “It’s a long season, and these guys are showing guts and gained a win after dropping our last three matches.”
The Braves will be back in action matching up against Eastern Illinois at noon on Wednesday.
More from SportsMore posts in Sports »