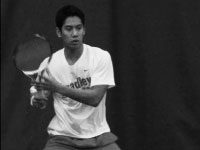 The men’s tennis team competed on the weekend of Jan. 22 in the Missouri Valley Conference tournament in Des Moines, Iowa, at Drake University.
The tournament began with individual play before moving to doubles play at the end the competition.
The Braves had three players advance to the singles semi-finals on the first day of play. Senior Milos Romic and freshmen Juan Cuadrado and Brock Reiman each went 1-1 to advance.
Seniors Callen Fraychineaud and Richard Robinson and freshman Eric Nguyen went 0-2 and were eliminated from title contention on the first day.
On Saturday, the Braves went 0-3 in the semi-finals of  the singles portion of the tournament. Romic, Cuadrado and Reiman all lost in straight sets to be eliminated, ending the team’s chances at an individual title.
Robinson earned his first singles win of the spring in a consolation match before winning two more matches on the day with doubles partner, Nguyen.
Robinson and Nguyen’s wins were enough to allow them to win the pool and earn them a spot in the doubles Flight 3 semi-finals on Sunday.
The Flight 1 duo of Fraychineaud and Romic along with Flight 2 team of Cuadrado and Reiman each went 0-2 and were eliminated.
On Sunday, Robinson and Nguyen began the day with a semi-final victory winning 8-6 to advance to the Flight 3 doubles final.
The duo faced Wichita State’s Flight 3 team in the final and lost a close match 9-8.
Robinson and Nguyen’s 3-1 record earned them a second place finish.
Romic believes the team competed well in the MVC tournament.
“We played a lot better than last year,” Romic said. “The conference overall is improved, so that is a good sign for us.”
Romic also said the team has gained confidence against the rest of the conference.
“We usually compare ourselves to the rest of the conference teams. We feel like we can play with everybody,” Romic said.
More from SportsMore posts in Sports »