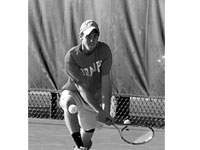 After capturing two singles titles two weeks ago, the men’s tennis team secured another title wit its No. 1 team at thei home tournament last weekend.
The senior tandem of Callan Fraychineaud and Milos Romic won all four of their matches to win the Hotels at Grand Prairie Invite doubles title.
In their first match, they faced against Eastern Illinois doubles team, winning with a score of 8-2.
After Eastern, they drew the doubles team of Wisconsin-Green Bay and handled them 8-3.
For their third match, the seniors were slated to play Valparaiso’s first doubles team, winning with a score of 8-5.
The final doubles round on the first day of the tournament was all they needed to secure the title. Their last match was against Saint Louis and Bradley finished them off 9-7.
On top of the doubles title at No. 1, the Braves’ No. 2 doubles team finished in second place. Senior Richard Robertson and sophomore Mitch Osbourne won three of their four matches at the second slot.
“I was pleased to see how we are coming along in doubles,” coach Jesse Plote said. “It was good to see how No. 1 and No. 2 doubles have stepped up to the plate.”
At No. 3 doubles, freshmen Eric Nguyen and Brock Reiman went an even 2-2 during the tournament to round out the doubles contests.
In addition to doubles, the men also competed in singles.
Fraychineaud took two victories from his competition, out of a possible four, to place in the top three in the tournament.
“I was pleased with Fraychineaud stepping up to No. 1 singles and having some good success there and helping him walk away with the confidence that he is among the strongest three players in the tournament,” Plote said.
At No. 2 singles, Romic won his first match but had to retire in the middle of his second match. He was not able to play in the rest of his matches.
Much like Fraychineaud, Reiman and Nguyen split their matches, with two wins and two losses.
Robertson rounded out the action for the Braves with one win and three losses.
“I am happy to see that we competed at every position and that we can learn from this tournament to become better from here out,” Plote said.
More from SportsMore posts in Sports »