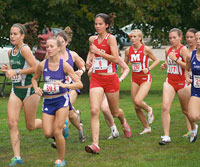 The men’s and women’s cross country teams both placed third at Detweiller Park in the Bradley Open last weekend.
Both teams fell to Missouri Valley Conference rival Indiana State, with the men scoring 81 points and the women scoring 68.
Each team had a top-10 finisher.
Sophomore Andrew Wieser finished 10th in the men’s competition (8K) with a time of 26 minutes and 19 seconds.
The women saw sophomore Mary Goldkamp finish with a time of 19:33 (5K) on her way to a seventh place finish.
Goldkamp finished in the top-10 for the second time in as many races.
Coach David Beauchem said he was happy with the way Goldkamp has been running  this season.
“She is definitely better than a year ago,” he said. “It is great to see her making improvements and coming back ready to race.”
Indiana State took each of the top five places in the men’s race, scoring the minimum 15 points, and the women scored 30 points with four top-10 finishes to win their race.
Beachum said he was content with how the team performed.
“I think we ran right about where we are at,” he said. “We still have room for improvment.”
Goldkamp had two Braves finish behind her as sophomore Lauren Fog crossed the line just three seconds behind Goldkamp at the 19:36 mark, good for 11th place.
Junior Amanda Switzer came in just two seconds behind Fog, taking 12th place with a time of 19:38.
Junior Rachel Brubaker, who won the race at Western Illinois the previous weekend, finished 15th at 19:51.
Sophomore Leann Murphy was the final runner to score points for Bradley. She finished 22nd with a final time of 20:26.
There were three other Braves runners who ran but whose points were not counted for the team.
Junior Tracy Lotter finished at 20:49, good for 28th place. Freshmen Rachel Garrett and Sarah Hallstein finished 30th and 32nd, respectively, with times of 21:04 and 22:11.
Behind Wieser, sophomores Brian Tyne and Tim Owdom finished 17th and 18th in the men’s race.
Tyne finished at 27:36 and Owdom finished four seconds behind at 27:40.
The next two finishers for the Braves were freshmen Joe Wegner at 29:02 and Sean Swanson at 31:18.
Freshman Chris Frank’s 25th- place finish and time of 31:23 was not counted towards the team’s score.
The Braves now have time off before they head to Minnesota on Sept. 27.
Beauchem said the team will use the time off to improve and prepare for the conference meet.
He wants to focus on running together.
“We have to close the gap between our second and fifth runners,” he said.
More from SportsMore posts in Sports »