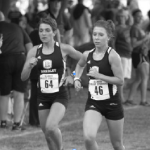 In college athletics, it’s easy for cross-country to get overshadowed by more popular sports. But the Bradley men’s and women’s cross country teams are bucking that trend and are both on their way to the program’s best season in several years.

“We’re off to a great start,” said men’s and woman’s coach Marc Burns. “We knew we were going to be a lot better this year, but you never know until you lace up the spikes and get out on the course and race.”

Both teams had a fantastic performance at the Illinois State Invitational on Sept. 13 with the women winning the race and the men finishing third.

The dominating performance came on ISU’s home course and the Redbirds were picked in the preseason to win the Missouri Valley Conference.

It was the first time the teams had returned to ISU after both having disappointing finishes in the MVC Championship there last season.

“I think we went in remembering what happened last year there at the conference meet,” Burns said. “We had a chip on our shoulder and really wanted to get after it and see what we could do.”

With strong starts to the season, both the men and women’s team have high expectations for the rest of the year. After a great start last season, the women’s team faded down the stretch. Burns said they feel like they’ve gone through the trials and tribulations and are ready to make the next jump.

“We laughed at the fifth place preseason ranking [in the MVC],” he said. “We took it to heart and said ‘we’re going to prove you guys wrong.’ I know our girl’s goal is to go in there and win the conference meet. I think we have a very good chance if we have the right mentality to go in there and challenge for a title.”

After a disappointing performance at the conference meet last season, the men are looking for revenge this year. They were picked seventh in the preseason.

“We finished eighth [at the conference meet] last year, which was just atrocious for us,” Burns said. “It was getting your legs wiped out from underneath you or getting kicked in the gut. That’s what we felt like. As disappointing as it was the guys used it as motivation. We had a really strong track season and summer and now our goal is to be in the top 5.”

Both teams will race in the MVC Championships on Nov. 2 in Des Moines, Iowa