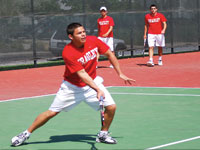 Senior tennis players Callen Fraychineaud, Richard Robertson and Milos Romic walked to the intersection of Glenwood and Bradley Avenues for the last time on Saturday to compete on the David Markin Tennis Courts.
It was Senior Day for the three and they made the most of it.
“It’s more fun, more relaxed,” Robertson said.
Robertson and Romic teamed up for their first conference doubles win together, beating Creighton’s Kyle Obermeier and Gabe Nagy 8-2.
Robertson said it felt pretty good to win their first doubles match of the day.
“We hangout all the time,” he said. “It’s extra special.”
The freshman pair of Juan Cuadrado and Eric Nguyen followed suit and beat Conner Macey and Sean Mathison 8-4.
Bradley almost swept doubles play but freshman Brock Reiman and Fraychineaud were cut short in a close match by Creighton’s No. 1 pair of J.T. Christian and Billy Paluch.
“Brock is a freakishly huge server,” Robertson said. “If he sticks with it, he’ll be great.”
On the singles side, Fraychineaud was able to pick up a win by shutting out Nagy 6-0, 6-0. Nguyen edged out Creighton’s James McAvoy in a match that came down to nail biting tie breaker 6-3, 7-6 (9-7).
Romic was able to pick up yet another win on his Senior Day by defeating Christian 7-5, 6-3.
“It’s kinda like a job,” Romic said. “You learn to be responsible.”
Robertson said the responsibility learned by all three seniors helped them make sure they all walked away from their last event with a win.
“We stick through it no matter how hard it is,” he said.
Today’s State Farm Missouri Valley Conference Tournament in Wichita, Kansas, is the next challenge that lays ahead of the men’s tennis team.
“It’s an 11 hour drive to the tournament, we’ll be doing a lot of sleeping on the way there,” the Romic and Robertson said.
The tennis team now turns its focus to the MVC Championships at Wichita State this weekend.
“All the teams play a bit better,” Romic said. “No one will be blowing anyone out at the tournament.”
More from SportsMore posts in Sports »