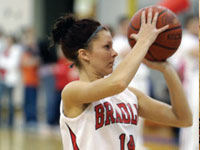 Sophomore Michelle Lund has been playing basketball ever since she can remember.

“I’ve been playing since I was really little,” Lund said. “I actually have a basketball court at my house that my dad built.”

In high school, Lund was the all-time leader in scoring in Sioux City, Iowa history. She finished her high school career with 1,837 points, 338 points more than the prior record. During her senior year, she was named Class 3A Iowa Player of the Year.

Lund has continued her impressive career in college receiving several honors during her freshman year including Missouri Valley Conference all- Freshmen team and State Farm MVC Newcomer of the week.

“I wasn’t expecting to do as good as I did,” Lund said. “I got put in the starting rotation, and how well I did was from the team effort all together.”

At the end of the season, Lund averaged 12 ppg and she finished 27th in the nation in three-point field goal percentage.

“Before every game I just think about playing a solid game,” Lund said. “I need to focus on a solid game.”

The team is coming together and trying to work on becoming a better team defensively, Lund said.

She said she is focusing on having another good year on the court and working hard in practice to make herself an overall better player.

“In practice I work hardest on my weaknesses,” Lund said. “I work on communication and leadership on the court as well as defense and rebounds.”