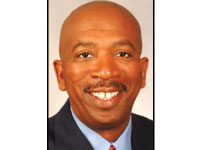 Clemson coach Oliver Purnell is leaving the ACC school to take a job in the Big East at DePaul.
He signed a seven-year contract with the Blue Demons that will pay him more than the $1.7 million he was getting paid at Clemson.
Several coaches had been reported to have DePaul’s interest to fill their vacancy at head coach.
The Blue Demons finished 1-17 in the Big East and 8-23 overall last season and were winless in conference.
Purnell leaves the Tigers after they reached the NCAA tournament for the third straight time.
More from SportsMore posts in Sports »