Peoria Chiefs affiliate with the Redbirds 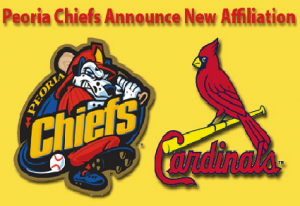 “It just shows you the type of fan support the St. Louis Cardinals get,” Mozeliak said. “And if this is a reflection of what we’re going to see this summer here, I think this is just great news for not only Peoria but our own fan base in St. Louis.”

The Chiefs were a Cardinals affiliate from 1995 to 2004, when they made the playoffs four times and won their only Midwest League Championship in 2002. Since 2005, the Chiefs have been affiliated with the Chicago Cubs, until its affiliation ended after this season when the Cubs decided to change their affiliation to the Kane County Cougars.

“We’ve had great support and great response since last Wednesday [when] we were able to announce that the St. Louis Cardinals were going to return to Peoria and be their class-A affiliate for many, many years,” Vonachen said.

During the Chiefs’ first tenure with the Cardinals, multiple Major League All-Stars such as Albert Pujols, Yadier Molina, Dan Haren and Placido Polanco started their careers in Peoria. In total, 60 players that played for the Chiefs as a Cardinals affiliate made it to the Majors.

“We just finished up our 30th year of professional baseball in Peoria and our 10th anniversary here at [Peoria Chiefs Stadium] and we’ve had some great history and some great players come through here,” Vonachen said. “But it doesn’t touch the great history and tradition of the St. Louis Cardinals. Probably the best Major League Baseball organization in the country if not the best sports franchise in the country and we are very, very proud to be back as a part of the St. Louis Cardinals family.”

Citing a geographical advantage between Peoria and St. Louis, Mozeliak said the possibility exists for Cardinals players to conduct their Major League rehab assignments for the Chiefs.

“When I looked at all of the people that came out today, seeing all of the Cardinals fans and understand what it means to do this and get this reaction, I know we made the right decision,” Mozeliak said. “I can tell you from ownership to front office, we are thrilled to be back here.”

While the Cardinals are on pace to make the playoffs again after their World Series championship last season, 20 players on their current roster have either played for the Chiefs or the Quad Cities River Bandits, who was their former single-A affiliate.