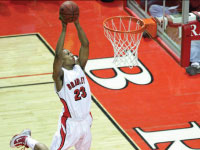 Bradley senior basketball player Chris Roberts finished second in the dunk contest at the College Slam Dunk and Three-Point Championships in Indianapolis during the Final Four festivities.
Roberts competed against the best senior dunk artists in the country in the event televised on ESPN.
During his time in Indianapolis, Roberts got the chance to interact and compete against some of the best college players in the country.
“There were a lot of guys from bigger schools and I thought they would be a little big headed,” Roberts said. “But they were all pretty cool.”
The first round of the contest consisted of two dunks for each of the eight competitors. The top four scores in the first round advanced to the semi-finals where the competitors were allowed one dunk. The top two dunkers after the semi-finals then advanced to the final round where one dunk decided the winner of the competition.
“Going into the competition I knew what dunks I could do,”
Roberts said. “But it wasn’t until after I talked to the other guys to see what dunks they were doing that I knew what I was going to do. I just fed off the crowd and tried to do what they wanted to see.”
In Roberts’ first dunk, he threw it high off the glass and caught the ball with two hands before throwing down a one-handed jam. The dunk earned Roberts a score of 47.5 out of 50.
Roberts’ second dunk was arguably the best of the competition and brought the house down.
He threw the ball high off the backboard and caught it above the rim before spinning 180 degrees in mid-air, slamming the ball down behind his head.
Roberts missed the dunk the first time he attempted it but was able to finish it the second time. The dunk earned a perfect 50 from the judges
“I’ve never really been able to dunk backwards,” Roberts said. “I just knew after I missed it the first time I had to jump higher to get it down.”
Roberts said he was nervous during the contest with the big crowd and so many viewers watching on ESPN.
“It was fun, but I was nervous at the same time,” he said. “I knew I had friends and family and all my teammates and coaches supporting me so it made it easier.”
Roberts’ efforts in the first two rounds earned him a spot in the finals against Vermont’s Marques Blakely.
Roberts missed his first two dunks in the final round and ultimately settled for a tomahawk jam. The dunk earned a 40, but it wasn’t enough to beat Blakely whose final round dunk got a score of 41 from the judges.
The dunk contest officially ended Roberts’ career as a Brave.
“I didn’t know if I would be able to put on the Bradley uniform again so it felt good to put on the jersey one last time,” he said.
More from SportsMore posts in Sports »