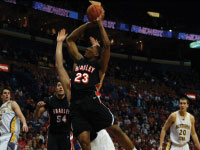 Butler’s not the only mid-major represented at this year’s Final Four. Bradley’s high-flying senior Chris Roberts is taking his highlight reel dunks to the NCAA’s main stage.
Roberts was selected to be one of the six dunkers in the State Farm College Slam Dunk Championship that took place on Thursday. Results were not available at press time.
Roberts joins fellow dunking black belts Gerard Anderson of Cal State-Fullerton, Marques Blakeley of Vermont, Ryan Brooks of Temple, Lazar Hayward of Marquette and L.D. Williams of Wake Forest.
This marks the second appearance for Bradley in this competition. In 2006, Lawrence Wright competed the last time the Final Four was held in Indianapolis.
Roberts has made a name for himself on Sportscenter for his acrobatic dunks and miracle heaves. His four appearances on Sportscenter’s Top Plays are the most in Bradley history.
One of those appearances is the infamous three-quarters court shot to beat Oakland in last year’s CollegeInsiders.net Invitational.
But the other three are dunks. The last time Roberts was on ESPN was his put-back dunk in the Missouri Valley Conference quarterfinals against Creighton.
Roberts, who first dunked when he was a 16-year-old sophomore at Dunbar High School in Fort Worth, Texas, said he doesn’t practice dunking much now.
“In high school I did, but now I really don’t,” Roberts said. “Sometimes I’ll mess around with my teammates, but it’s all natural now.”
Even though he doesn’t spend much time practicing dunking, he does spend time working on his athleticism in the weight room.
“I do a lot of leg extensions and leg press to increase my jumping ability,” Roberts said.
Roberts said his involvement in the competition wasn’t planned all season.
“This all kind of just happened,” Roberts said. “The guys wanted me to get involved.  I had a few great dunks this year and it was enough to get me here.”
Roberts said he is heading into the contest without a game plan.
“I’m going to figure out my plan once I get there,” he said. “I’m going to pick the guys’ brains a little bit to figure out my dunks.”
More from SportsMore posts in Sports »