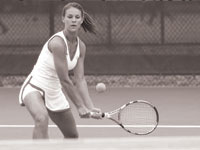 Last weekend, the women’s tennis team competed in its first tournament of the season at the Illinois State Invitational.
Although, four players made it into final matches, the team only earned one title.
“I thought the weekend went well, we competed hard for the first tournament of the year,” coach Scott Petersen said. “It is always good to have singles and doubles successes after only a few days of practicing.”
The team started off strong Friday with senior Jessica Buterbaugh and freshman Kennedy Scott earnings wins in their Flight D single matches.
Friday night ended with two doubles wins from pairs junior Nicole Miller and senior Emily Regenold and Buterbaugh and senior Kelly Donohue.
The team also performed strong on Saturday, earning four singles wins from Donohue, Miller, Regenold and Scott. In Flight D, teammates faced off with Scott earning a win over Buterbaugh.
In the Flight C semifinals, Donohue won against Butler University’s Heather Hayward 6-0, 6-1, and advanced to the semifinals. She went on to beat Morehead State’s Alix Lakow 6-1, 7-5, and won the Flight C championship.
“I think the biggest challenge we faced this past weekend was getting our timing back,” Petersen said. “We looked a step slow at times and looked to be reacting to what our opponents were doing versus being in control of the points.”
Donohue won the only title for the Braves with her singles championship on Saturday. And Scott made a strong first appearance by taking second in her first college inviatational.
“I think this weekend did help everyone see what they need to work on for both singles and doubles to prepare us for this upcoming weekend,” Petersen said. “This fall will be filled with some very tough tournaments, which I think will prepare us well for the spring and conference season.”
Women’s tennis will return to play today, at the Ball State Invitational in Muncie, Ind.
More from SportsMore posts in Sports »