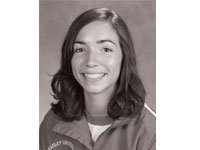 For freshman cross-country runner Nicole Benson, an injury made the transition from high school easier rather than harder.
Benson red-shirted her first year due to an injury and is now making a name for herself on the college scene.
“Having more time between races has allowed me to train harder and longer,” Benson said. “My teammates are also much faster and that gives [me] the motivation I need to train harder and harder each day.”
Benson said her high school coach introduced her to cross-country and she had no idea what it was or how far she would be able to go.
“I started making running my priority and by doing so [it] allowed me to excel, but it took a lot of work,” she said. “It was not something I could slack at. It’s now become a lifestyle for me.”
Benson said she aspires to be like Paula Radcliffe, a British runner.
“She is a phenomenal distance runner,” Benson said. “She has dealt with injuries and still carries a high spirit.”
Benson said she is fairly superstitous and makes sure not to change up her routine before she races.
“I make sure to take my own food and drinks when I travel with the team, and I make sure to rest the same as I would if I were at home,” she said.
Benson said she thinks of race day as the same as going to the gym for the hardest workout of the week.
“I’m going to have to do surging, but I know I’ll get through it,” she said. “I do my best to stay alert and know what I’m going to be expecting during my race.”
Benson said she doesn’t think she gets pre-race nerves any more than other athletes.
“I feel anxious with excitement right before a race,” she said. “I know that I’ve prepared to the best of my ability and the nerves will always be there. It’s part of racing. I stay confident, but I’m always nervous until the gun goes off.”.
Benson’s best times in races this season were: 17:37 in the 5K and 22:34 in the 6K. But she said those times don’t meet her expectations.
“I came up short by placing runner up,” she said. “At NCAA regional I had set my goal to finish top-10, but ended up settling for All-Region honors by finishing in top-25. Every race has a purpose and a goal I need to achieve.”
Benson said she sees a promising future for the Braves.
“We are going to do some great things in the seasons to come,” she said.
More from SportsMore posts in Sports »